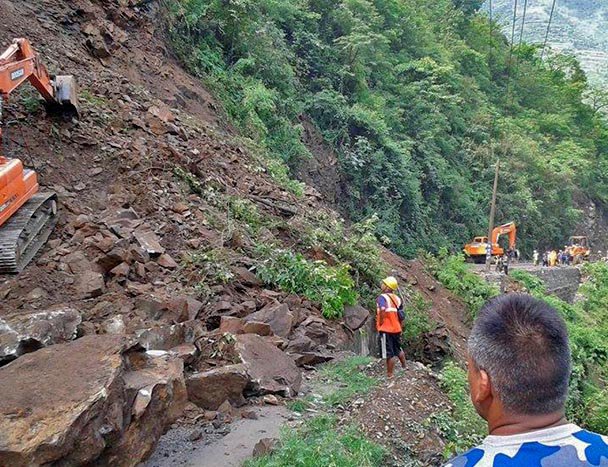 Director General at Road Department Keshav Kumar Sharma said that it may take at least two days to clear the blockade and reconstruct the damaged section of the road. "Unless the rain stops, it is difficult to begin reconstruction at Mauwakhola."

He said that further efforts will be made after holding discussion with local administration, Nepal Army, Armed Police Force, Nepal Police and others reports RSS.

More than 200 landslides- big and small- occurred in the section of Muglin-Naubise along the Prithvi Highway with the incessant rainfall for some days. The road is completely damaged at the bridge over Mauwakhola stream linking Chitwan and Dhading.

Chief of Division Road Office, Bharatpur, engineer Krishna Raj Adhikari informed that the landslips were still occurring in many places along the road. A huge landslide occurred at Jogimara early this morning. "Mauwakhola has major problem. Efforts are underway to create wall using gabion wire," he added.

Flood In Melamchi, Chanaute Bridge Was Washed Away By Agencies 1 day, 11 hours ago

FLOODS AND LANDSLIDES Monsoon Havoc By A Correspondent 1 week, 6 days ago

Nepal Army Launches Rescue And Relief Operation To Save People From Landslide And flood By NEW SPOTLIGHT ONLINE 3 weeks, 3 days ago

The Death Toll From Monsoon Flood Reaches To 51, 60 Missing And 35 Injured Across Nepal By NEW SPOTLIGHT ONLINE 3 weeks, 4 days ago