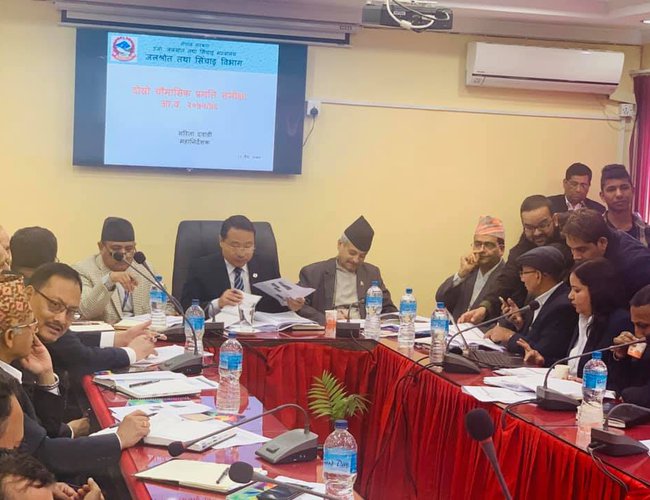 Minister of Energy, Water Resources and Irrigation Barshaman Pun directed higher officials of the Ministry to take initiative to hold a meeting with India on flood and inundation. He directed to call Nepal-India Joint Committee on Inundation and Flood Management (JCIFM) meeting soon.

Minister Barshaman Pun has directed his officials to start preparing for talks with India over inundation problems faced by border areas of Nepal due to the embankments and dams constructed by India.

India and Nepal are both facing the problem of inundation during monsoon season and hundreds of lives have been lost in the past.

In a meeting on late Friday afternoon, Pun directed officials to prepare for CIFM where the issue of flooding will be raised.

"Due to the inundation, the Terai region is facing a problem. We would need to call on Indian sides to resolve the problem created by the dams constructed on their side by calling on the meeting of JCIFM. Start preparations for it," said Minister Pun,

Nepal and India have been holding on the meeting of JCIFM annually in November but the Ministry has started on preparations to inform the Indian side with immediate effect after receiving a direct order from the Minister.

The Joint Commission formed by India and Nepal to discuss on the issue will be led by Director General of Nepal's Irrigation Department Madhukar Prasad Rajbhandari. Earlier this week, Nepal's Minister for Home Affairs had blamed India for the inundation of the Terai region during the annual monsoon season.

More Cylinders Will Be Brought From China Via Tatopani Border: Foreign Minister Gyawali By Agencies 2 days ago