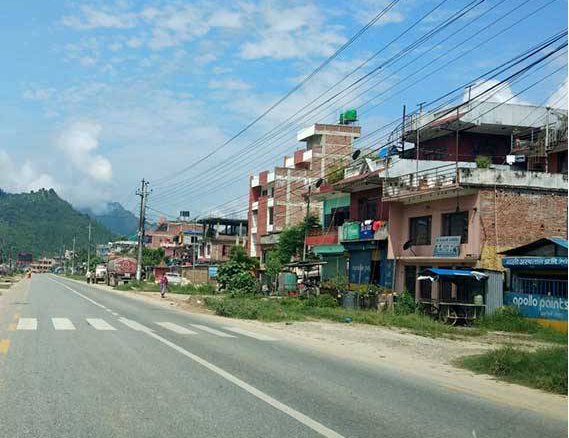 Following the rise of COVID-19 cases in Kathmandu Valle, the Ministry of Home Affairs has tightened the security at the entry point completely shutting down the movements of the people from all the entry points.

Home Ministry has already instructed to shut entry into Kathmandu except for urgent cases. Interdistrict movement of vehicles has also been restricted with the rise in COVID-19 cases lately.

Following the decision, the Prithvi Highway, which is often crowded with the vehicles entering and exiting the Kathmandu Valley, has been wearing a deserted look of late.

After complete restriction was imposed to enter the Valley due to increasing cases of COVID-19, only ambulances, vehicles carrying food supplies, and other vehicles used for essential services are seen running on the Prithvi highway, a gateway for 69 districts leading to the capital city.

According to the decision of the Dhading District Security Committee, movement of all vehicles except essential services has been prohibited in the district.

The Dhading district has imposed a prohibitory order from the Dhading-Kathmandu border, Piplamode, to the Chitwan border, Mauwakhola, which came to effect from August 14.

Rudra Malla, acting Chief District Officer of Dhading, said, "After the lockdown was ended, a massive increase was observed in the number of people entering the Kathmandu Valley. Thus, we have imposed a prohibitory order in the main highway leading to the Valley."

In the decision, which was also approved by the Ministry of Home Affairs, entry and exit of vehicles from Nagdhunga, the main entry-point of Kathmandu Valley, has been prohibited until further notice.

According to the Ministry of Home Affairs, security personals stopped 19483 people and more than 7635 vehicles without valid entry pass in check posts and asked them to return to their original destinations.

Similarly, the Ministry of Home Affairs also detained 419538 persons walking without wearing a face mask. Out of them, 354884 persons were released with advice to wear mask and 25207 persons were penalized. The Ministry also distributed 39507 masks.

After revealing that nearly 25 percent of new cases of COVID-19 confirmed in the last three days is from the Kathmandu Valley, the Ministry of Home Affairs has further tightened the security. With the mobilization of local levels and community, the restrictions are imposed in various regions.

In the last three days, 1,647 cases were detected across the country, of which 399 cases were from the Kathmandu Valley, according to the Ministry of Health and Population.

Kathmandu's share of the new cases compared to the total cases in the country in the last three days is about 24.22 percent when calculated.