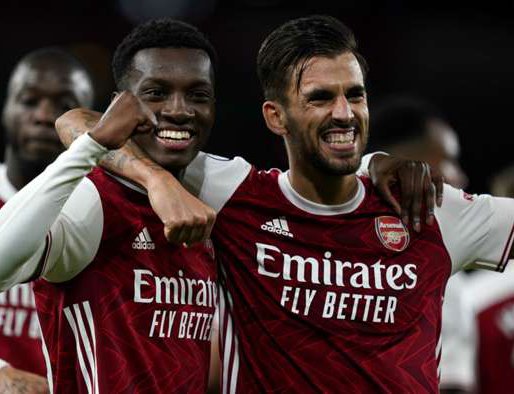 West Ham looked set to ground out a point until Arsenal substitute Eddie Nketiah tapped home a winner in the 85th minute. Eddie Nketiah came off the bench to score a late winner as Arsenal edged past West Ham 2-1 in the Premier League at Emirates Stadium on Saturday. Goal

The Gunners looked destined to labour to a draw in their first home game of the season until Nketiah slotted home Dani Ceballos' pass with five minutes remaining.

Nketiah had only come on in the 77th minute for Alexandre Lacazette, who had opened the scoring in the first half with his 50th goal for Arsenal in all competitions.

Michail Antonio equalised before half-time and also rattled the crossbar with a header before Nketiah popped up to consign the Hammers to a second successive defeat to start the campaign.

Jarrod Bowen felt he should have been awarded a penalty when challenged by Gabriel but nothing was given, and Arsenal moved in front courtesy of Lacazette's powerful header from Pierre-Emerick Aubameyang's cross.

Gabriel avoided conceding a penalty again when the ball hit him high on the arm, yet West Ham drew level on the stroke of half-time when Antonio turned home Ryan Fredericks' low delivery.

Antonio was unable to add a finish from six yards to Arthur Masuaku's excellent cross after the restart, while he was then denied by the woodwork with a header in the 67th minute.

Arsenal came under increasing pressure and Bernd Leno's blushes were spared after the goalkeeper spilled a cross and Bowen's shot was blocked by a host of bodies in the box.

However, it was the Gunners that snatched all three points when Ceballos and Nketiah – who had to clarify they were on good terms after a pre-match altercation at Fulham last weekend – combined for the goal that made it two wins in as many games for Mikel Arteta's side.