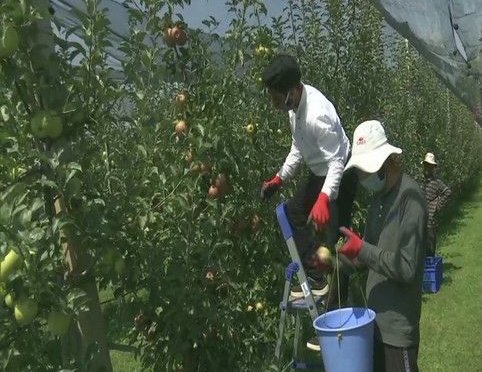 Srinagar (Jammu and Kashmir) [India] (ANI): The scientists of Sher-e-Kashmir University of Agricultural Sciences and Technology (SKUAST) have introduced the 'Hail Net System' to protect high-density apples in Jammu and Kashmir.

The scientists and experts took another developmental step in the shape of introducing the Hail Net System aimed to protect the high-density apples.

Dr Khalid Mushtaq, Head Division of Fruit Sciences, SKUAST told ANI, "Hail Net System consists of support structure and plants and drip for every. These are the three basic principles necessary for every setup."

This new system protects the orchards from the extreme climatic conditions and birds in the Union Territory.

"Anti-hail nets being used to protect the crop from damage caused by hailstorms. Also, it helps in saving crops from birds," said Mushtaq.

SKUAST has introduced black and white coloured net with other infrastructure protecting the crops from hailstorms and high temperatures. This is the first initiative taken by the authorities on experimental bases at the institute where the scientists are always doing different types of experiments aimed to boost the horticulture sector.

Suhail Mushtaq, a B.Sc student at the university said, "The uncertain temperature harms the produce in the orchards. But these nets protect them from the harsh weather conditions."

Various apple growers are getting training to set up the netting system.

Inam Mir, an apple grower said, "One needs to be trained to set up these nets at their orchard. There are two kinds of the net, that is, black and white which are used as per the climate condition."

Elaborating on the kinds of netting systems, Mushtaq said, "We can use hail net in the situations like hailstorms and sun damage."

"These nets ensure that the product is safe from extreme climatic conditions and from birds as well," he said.

Speaking about the investment by the Jammu and Kashmir administration, Mushtaq said, "The administration has taken horticulture especially apple produce as a prominent sector. They are also encouraging scientific intervention in the sector which can improve the product."

He said if the industry is worth Rs 6,000 crores currently, the government wants to expand it to Rs 20,000 crores to Rs 25,000 crores in the next five years. "And if they want to expand the industry in the future, they need to start acting on it. They should change the orchards."

Mushtaq's suggestion to the farmers, who have an old orchard with low bearing age is that they should switch to high density. "But high density will only benefit if they maintain the orchards." (ANI)