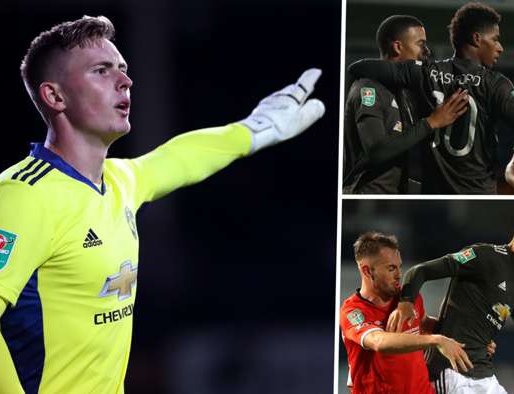 The goalkeeper produced a crucial save at 1-0 before subs Marcus Rashford and Mason Greenwood secured Ole Gunnar Solskjaer's side a win at Luton.

Manchester United's League Cup clash with Luton had all of the elements of an upset.Goal

The visitors had arrived at Kenilworth Road on the back of a demoralising defeat to Crystal Palace in their Premier League opener at the weekend and were facing a Championship side who had made an unbeaten start to their campaign.

In Ole Gunnar Solskjaer’s book, this was effectively United’s third pre-season game, given his players had only had one full week of training together. The problem was, though, it wasn’t a friendly, and after their loss at home to Palace, they were in desperate need of result.

Having made 10 changes to the side beaten at Old Trafford on Saturday, Solskjaer handed some much-needed minutes to his fringe players, but the resulting lack of fluidity in his team's attacking play forced him to bring some first-team regulars off the bench to secure a place in the fourth round.

Furthermore, had it not been for the heroics of Dean Henderson, making his debut in goal, the game could have ended very differently.

The United boss has promised to give the 23-year-old a shot this season and stuck to his word at Luton.

One of the main doubts over Henderson's prospects of usurping David de Gea in goal was over whether he could remain focused for 90 minutes. Could he spend the majority of a game with nothing do but react when he needed to be called upon?

He answered that question emphatically when he got down low to deny Tom Lockyer an equaliser with just under 10 minutes to go. De Gea, who was watching on at home, will definitely know now that he has a real fight on his hands for the No.1 jersey.

Of course, Henderson's save also highlighted United's issues in attack. After all, should they really be relying on their goalkeeper to come to their rescue after 81 minutes of a game against Championship opposition?

Henderson obviously proved that United are now well stocked in nets, but can they say the same of their attacking department?

There’s no doubt the whole squad is suffering from the lack of pre-season to get them prepared for what is set to be another gruelling campaign but this was another laboured performance from Solskjaer’s side, who, for all their possession, made heavy work of trying to break down the hosts.

There were flashes of brilliance from Donny van de Beek on his first start in a United shirt. The Dutchman displayed clever movement and clear vision, and linked up well with Juan Mata and Jesse Lingard, who were both bright having being handed rare starts.

But, as they tried to find their way through the middle of a congested Luton midfield, they struggled to create openings for Odion Ighalo, who was unable to truly test James Shea in the Luton goal.

Van de Beek and Mata did combine well in the lead up to Williams winning the penalty from which the Spaniard gave United the lead just before the break, but as the game carried on and Luton grew in confidence, it became abundantly clear that Solskjaer would need a spark off the bench.

Lingard, whose long-term future is in doubt, had an encouraging game, seeing an effort cleared off the line by United academy graduate Ryan Tunnicliffe, but he was replaced in the 79th minute, as Solskjaer threw on Bruno Fernandes, as well as Marcus Rashford and Mason Greenwood.

The pace and penetration that had been sorely absent from United's performance suddenly arrived, with the visitors twice hitting Luton on the break to secure a 3-0 win.

Then, the 18-year-old Greenwood sealed victory with a brilliant run and smart finish.

“Going through is the big thing, some positives, we’ve got a keeper back there who does his job scored some nice goals at the end, you can see the impact they had,” Solskjaer told Sky Sports. “Apart from that, it was a good workout.”

It was hardly a performance to remember but an important job done as they try to build momentum for what’s going to be a long and tricky season.

United deserve credit for avoiding an upset but doubts over the depth of Solskjaer's attacking options certainly haven't gone away with the close of the transfer window edging ever closer.