Nepal Does Not Have Territorial Dispute With China, The Buildings Are Within The Chinese Territory: Foreign Minister Gyawali

Nepal Does Not Have Territorial Dispute With China, The Buildings Are Within The Chinese Territory: Foreign Minister Gyawali 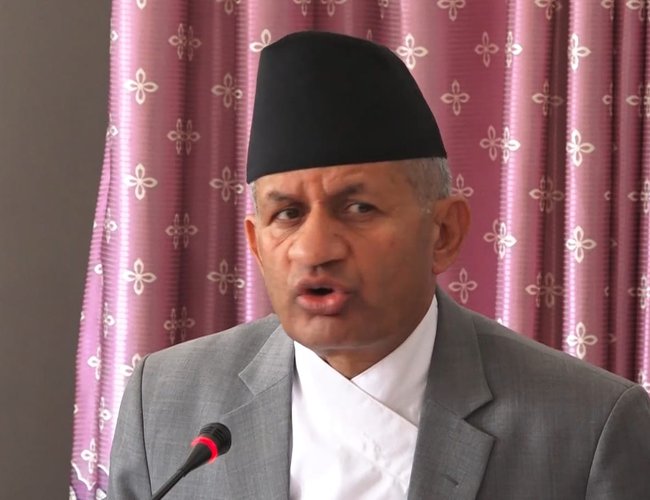 Minister of Foreign Affairs Pradeep Kumar Gyawali said that there is no truth in the media reporting regarding the alleged construction of the building by China within Nepali territory between Nepal-China boundaries.

Addressing a press meet to brief cabinet decision, minister Gyawali said that the construction of the buildings lie in Chinese territory as par our maps.

“We don’t have any territorial dispute with China and no Nepalese territory is under Chinese encroachment. Whenever there come to dispute, both the countries diplomatically settle through dialogue,” said foreign minister Gyawali.

He urged the media to maintains restraints before reporting such a sensitive issue.

The Government has made it clear that there are no border-related issues between Nepal and China. Speaking at a press meet held today, government Spokesperson Pradeep Kumar Gyawali said Nepal and China do not have any border dispute and problems. "In case any such problem surfaces we have cordial relations to discuss it and resolve it," he said.

RSS reports that Minister for Foreign Affairs, Gyawali said that the government's attention was drawn towards news reports about the border dispute between Nepal and China. "As it is a sensitive matter of border between the two countries, news reports should also include official versions," he said while referring to the news reports about China building houses within Nepali territory in Limi valley of Humla district.

He said that a team from District Administration Office, Humla had left for the field study. After the team returns, the government shall make the details public. Such sort of news had come in media four years back too and the government had conducted an investigation with inter-ministry coordination reports RSS.

Moreover, he shared that the two countries have agreed to normalize Keyrong border point within one week. The problem on border point was solved via continued diplomatic dialogue.

According to him, medicines including basic BCG vaccines have entered Nepali land for the first time. The border point was obstructed for some days after some workers at border point were infected with the coronavirus. "There were problems with transportation for some days resulting in the shortage of essential goods before the festivals," he viewed.

Earlier Ministry Of Foreign Affairs has issued a statement clarifying the reporting.

“Attention of the Ministry has been drawn to the media reports about the alleged construction of buildings by China within Nepali territory between Nepal-China boundary pillars number 11 and 12 at Humla district,” said a press release.

“The Department of Survey, Government of Nepal, based on the official records, reports of the joint field inspection and boundary maps, has verified confirmed that the said buildings are not located within the Nepali territory.”

“It may be recalled that the matter of buildings in question also surfaced in some media in 2016. An inter-ministerial team after the field inspection had concluded that the said buildings were located approximately one kilometer inside the Chinese territory from the Nepal-China border

According to the Ministry of Foreign Affairs, the boundary between Nepal and China was delineated and demarcated based on the Boundary Treaty and Boundary Protocols signed between the two countries. Nepal and China have always maintained close communication on border matters.