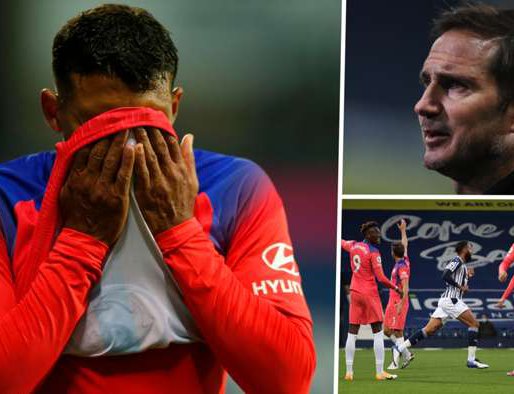 It has been a summer of excitement for Chelsea fans. Their club has been stockpiling new signings like a Fantasy Football player.

Unfortunately, the Blues have now been hit with a dose of reality. New arrivals cannot paper over old cracks and, after a chastening 2-1 loss at home to Liverpool and now a fortunate 3-3 draw at newly promoted West Bromwich Albion, Chelsea have been brought crashing down to Earth.

Frank Lampard's squad has been strengthened to the tune of £220 million ($275m) but the Blues' rebuilding project remains very much a work in process.

What have Barcelona done? Simeone & Suarez could make life hell for everyone in La Liga

Liam Delap: Have Man City unearthed their very own Haaland?

A draw at The Hawthorns constitutes a disappointing result for such an expensively side, but it could have been so much worse after a farcical first-half showing.

Callum Robinson's double and a Kyle Bartley goal left Chelsea 3-0 down after just 28 minutes of play. They fought back admirably in the second half, with Tammy Abraham snatching a point in injury time, after Mason Mount and Callum Hudson-Odoi had breathed new life into the game.

However, the evening's undoubted talking point was Chelsea's dire defending. Indeed, the idea of this team competing with Liverpool and Manchester City for the Premier League title was made to look ridiculous during the first half, as the Blues struggled to contain one of the weakest teams in the top flight.

Lampard's side were guilty of unforced errors, wasteful finishing and a flimsy set-up – and this, in spite of the fact, that three of the club's new signings started, with Thiago Silva handed the captain's armband.

Edouard Mendy didn't feature but Kepa Arrizabalaga was dropped after his dreadful outing against Liverpool. Willy Caballero fared little better than the error-prone Spaniard, though, conceding from the first three shots of the match.

The stand-in was let down horribly by those in front of him, though.

Marcos Alonso was partly at fault for the first goal, giving away possession cheaply to Matheus Pereira, who played Robinson in for his first league goal since netting against Chelsea over a year ago.

The Republic of Ireland international was gifted another soon after and this time Thiago Silva was to blame.

At 36, it was always going to be a challenge for the Brazilian to cope with the pace of the Premier League but few could have envisaged him sloppily giving away possession inside his own half by miscontrolling the ball under little pressure, thus allowing Robinson to race clear and score.

After two awful individual mistakes, Chelsea's long-standing problems at set-pieces then reared their heads again, allowing an unmarked Bartley to tap-in a flick-on from a corner.

Before the second goal, Lampard had his side attacking at will and creating chances in spite of their issues at the back. Tammy Abraham missed a simple six-yard box finish and Timo Werner hit the bar.

Heads dropped after Robinson's second strike, though. There was little communication and the west Londoners looked lost.

It didn't help that Werner was given defensive duties as a winger, Mount was out of position or that the two holding midfielders were exposed by Lampard's gung-ho approach.

Lampard would switch to a 4-3-3 in the second half that saw Werner protected by another man behind him and Mount in a more natural position.

Crucially, Alonso was also hauled off, allowing his replacement, captain Cesar Azpilicueta, to add a vocal presence to the defence.

The net result of the changes was a marked improvement in Chelsea's performance. Mount struck a stunning long-range strike to pull one back and then Hudson-Odoi coolly converted after a neat one-two with Kai Havertz to score.

Lampard then decided to roll the dice again, switching to a 3-5-2 system with Olivier Giroud joining Abraham in attack.

In the dying seconds, Chelsea forced an unlikely and perhaps undeserved share of the spoils when a hopeful ball into the West Brom box eventually ended up at the feet of Mount, whose shot was saved but left Abraham with a two-yard tap-in.

West Brom collapsed in disappointment but Lampard's side weren't much happier as they were served a second wake-up call in as many games.

However, it was one thing losing last weekend to the champions; it's quite another nicking a point at West Brom.

Chelsea fans have no right to expect fantasy football from their side just three games into the new season but they're entitled to expect better performances than last season – not more of the same defensive deficiencies.

Lampard has to learn from these setbacks. Progress must be made this term. A repeat of this first-half horror show cannot be tolerated.