Ministers from eight countries sign declaration to work together for the Hindu Kush Himalaya region, Cooperation on climate action, climate and disaster resilient communities in the mountains, downstream and beyond; and work towards a prosperous, peaceful and poverty-free region that is food, energy and water secure 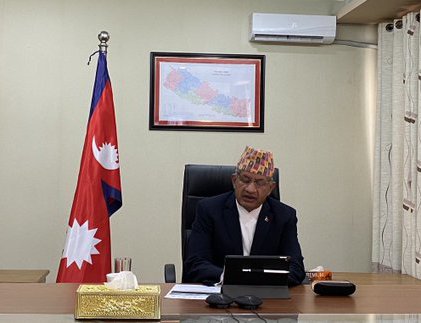 Kathmandu, Nepal (15 October 2020)—A landmark meeting of Ministers from across all eight of the Hindu Kush Himalayan (HKH) countries signed a historically significant declaration agreeing to strengthen regional cooperation in the HKH; to promote a united voice for the HKH at regional, global and UN platforms; to enhance the uptake of scientific evidence for improving policies in the region focusing on mountain environments and livelihoods; and to assess the feasibility of establishing a regional institutional mechanism.

This declaration is the culmination of a process begun as part of the Hindu Kush Himalaya Assessment. Styled after the Intergovernmental Panel on Climate Change (IPCC) reports, the HKH Assessment underscores the significance of the HKH as a vital regional lifeline and global asset, but also provides the scientific evidence that human drivers and climate change pose immediate threats to the region’s livelihoods, biodiversity, and ultimately, sustainability. Among the most significant of these drivers are climate change, demographic changes, growing demand for natural resources, rapid economic growth, unregulated urbanization, and widespread poverty in the mountainous regions. Food and nutritional insecurity remain a serious challenge in the HKH region; more than 30% of the population suffers from food insecurity and around 50% face some form of malnutrition, with women and children particularly vulnerable.

The ministerial declaration recognizes and supports the HKH Call to Action, which was drafted through a consultative process in all eight HKH countries based on the key findings of the HKH Assessment. This process aimed to jointly identify and develop a roadmap towards a more prosperous, healthy, peaceful, and resilient HKH region, for the 240 million people living in mountains and hills, and the 1.9 billion people living in the mountains and river basins downstream. Country-specific actions and solutions were identified during the consultations and six urgent actions were tailored at the local, national, and regional levels, generating a roadmap for collective ownership by the eight countries and actions at multiple scales.

“The HKH mountains are hotspots of climate change and people in this region are at the frontlines of climate change impacts,” said Eklabya Sharma, Deputy Director General of International Centre for Integrated Mountain Development (ICIMOD). “Since many of the disasters and shocks play out across country borders, conflict among the region’s countries could easily flare up. But we can turn around climate change and other negative impacts and bounce back better if governments work together towards green, resilient and inclusive recovery and take concerted action together. This HKH Call to Action provides a roadmap for the region and the six urgent actions are essential to point us along the pathway to more prosperity.”

The six urgent actions are: 1) promote and strengthen regional cooperation at all levels to sustain mountain environment and livelihoods; 2) recognize and prioritize the uniqueness of the HKH mountain people; 3) take concerted climate actions to keep global warming below 1.5 degrees; 4) take accelerated actions to achieve the SDGs in the mountains; 5) take decisive actions to enhance ecosystem resilience; and 6) promote regional data and information sharing.

During the country consultations, there was a strong consensus that the HKH Assessment and HKH Call to Action need attention at national, regional, and global scales to significantly enhance cooperation in the region. There was agreement that it provides an opportunity for many new and innovative projects to leverage more resources, larger investments, and technical support, coming both from South-South and North-South engagement for a prosperous HKH. 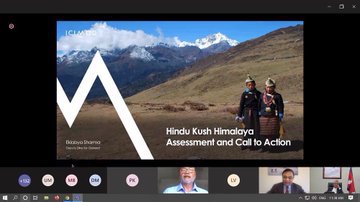 “The global significance of the Hindu Kush Himalaya region is indisputable and it is clear that disruptions such as the COVID-19 pandemic lay bare the vulnerabilities of mountain communities,” said David Molden, outgoing Director General of ICIMOD, “The Hindu Kush Himalaya is the pulse of the planet. When the pulse is strong, we know humanity is healthy, but when the pulse is weak, we know we have problems in the world. And while today we feel a weak pulse in the HKH, we also feel today is a turning point in history to strengthen cooperation and prosperity in the region”.

The Summit was hosted virtually, with the Minister of Foreign Affairs of the Government of Nepal, Pradeep Gyawali expressing his governments’ ongoing commitment to promoting a unified voice for the HKH mountains as a host country for ICIMOD.

“I have been very closely attentive to the HKH Assessment and Call to Action processes which have brought together scientific evidence to support clear and urgent actions necessary for our region,” Pema Gyamtsho, incoming ICIMOD Director-General said. “I am deeply committed and eager to take forward this process, to expand our cooperation across the region and to activate our collective courage in facing these very complex issues. We are stronger when we work together.”

Nepal Army Collects Over 30,000 KG Of Wastes From Major Mountains By Agencies 15 hours, 22 minutes ago