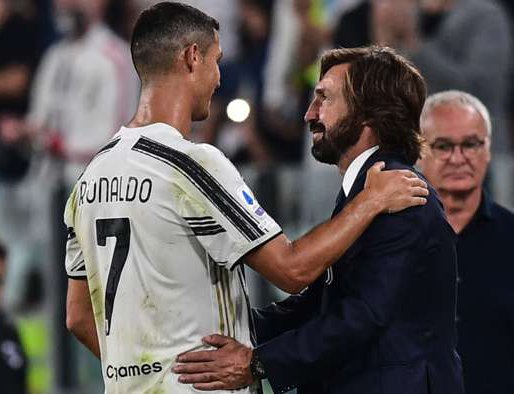 Andrea Pirlo says he wants to use Cristiano Ronaldo on the left of a front-three upon his return as Juventus crashed to another poor result with Leonardo Bonucci suffering an injury.Goal

The Old Lady fell to a 1-1 draw against Hellas Verona at Juventus Stadium on Sunday, needing a Dejan Kulusevski equaliser to salvage a point with 13 minutes to play, while Bonucci limped from the field in the 75th minute.

After winning their opening Serie A match against Sampdoria, Juve have now drawn matches versus Roma (2-2), Crotone (1-1) and Hellas Verona, with their only win coming when Napoli defaulted after failing to show up to match.

Ronaldo hasn't featured for Juve since failing a Covid-19 test while in Portugal camp earlier this month and his return date is unknown after again testing positive for the virus last Wednesday.

The Portuguese superstar will need to pass a coronavirus test 24 hours before a match, meaning his participation in Wednesday's Champions League blockbuster against Barcelona is still in doubt.

Pirlo was asked how he plans to fit Ronaldo into the team alongside Paulo Dybala and Alvaro Morata, with the Juve legend revealing he wants to use the 35-year-old in the position he dominated in for many years at Real Madrid.

"We are thinking to play them as a front-three," Pirlo told reporters post-match. "With Ronaldo in his classic centre-left position".

Bonucci came from the field under duress with 15 minutes to play and was replaced by young defender Gianluca Frabotta.

Pirlo revealed the 33-year-old suffered a fitness issue during the 2-0 mid-week Champions League win against Dynamo Kiev, but didn't mention if the two ailments were connected.

"He had already something during the Kiev match," Pirlo said. "We'll evaluate."

Kulusevski has enjoyed a solid start to his Juve career, with the 20-year-old contributing two goals and one assist in his five appearances across all competitions.

Pirlo explained why the Swedish international started on the bench and spoke of his surprise that Dybala finished the match on the field.

"These matches are tough because there are many duels on the whole pitch, we wanted to skip their first pressure by playing with one touch," Pirlo said.

"Kulusevski has been playing for six matches and we didn't have other subs, but when he has come on the pitch he has played very well. Dybala? We didn't expect him to last 95 minutes."

Juventus currently sit fifth on the Serie A table, three points behind leaders AC Milan, who have an 100 per cent record and a game in hand on the Old Lady.

Tokyo Olympics Opening Ceremony To Be Held On Friday By Agencies 2 days, 3 hours ago

Suga To Meet Dignitaries Arriving For Games By Agencies 3 days, 3 hours ago

Tokyo Olympics To Start In 10 Days By Agencies 1 week, 4 days ago