Republic Of Korea Has Set An Example Holding Elections Amid COVID-19: Speaker Sapkota

Republic Of Korea Has Set An Example Holding Elections Amid COVID-19: Speaker Sapkota 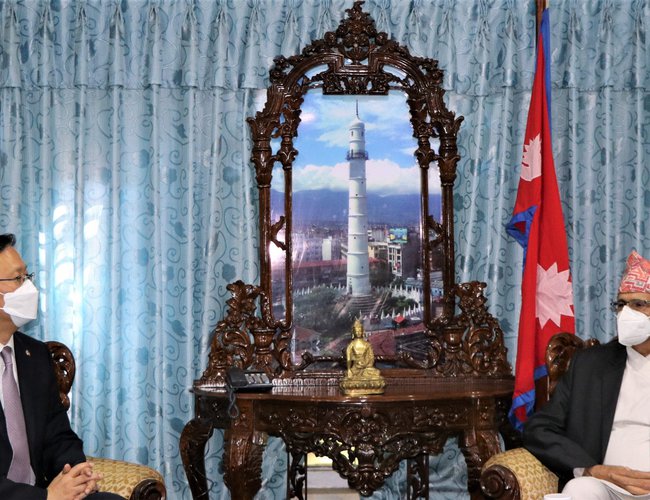 Ambassador of the Republic of Korea to Nepal, Park Chong-suk, has paid a courtesy call to the speaker of House of Representatives Agni Prasad Sapkota at his office in Parliament Secretariat on Monday.

During the meeting, speaker Sapkota congratulated ambassador Park Chong-suk for his successful tenure in Nepal. He said that the relations between Nepal and the Republic of Korea have been always cordial and friendly since the establishment of diplomatic relations 46 years ago.

Ambassador Park said that he is highly honored and happy to take up his assignment as the Korean Ambassador to Nepal. He also said that Korea and Nepal have enjoyed a very cordial relationship since the establishment of diplomatic relations in 1974; He said he will do his best to take the bilateral relations to a new level during his tenure.

He said that Korea has donated Nepal the medical supplies for COVID-19 during the beginning of the outbreak of COVID-19 through KOICA and he assured that further support in the future. Ambassador Park also said that more foreign investment will come from Korea to Nepal in various sectors,

He reminded the successful signing of the Financial Agreement of 216MW Upper Trishuli-1, which is a privately funded project, has set a positive example for all other investors.

Today Is Republic Day, President And Prime Minister Call To Strengthen Republic
May 29, 2022
Weather Forecast: Light To Moderate Reain In Kathmandu And Pokhara
May 29, 2022
COVID-19 Update: Nepal Confirms 5 New Cases And 15 Recoveries
May 28, 2022
India Has Greatly Contributed To Nepal’s Development: Minister Karki
May 28, 2022
Charge’d Affaires Of The Embassy Of India Namgya C. Khampa Inaugurated School In Lomanthang
May 28, 2022