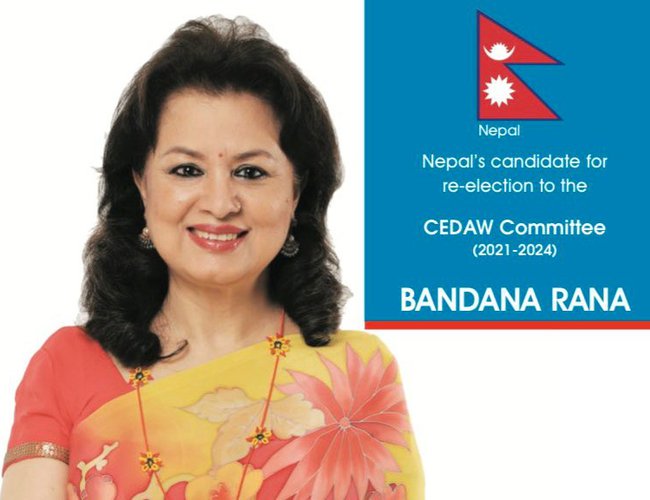 Wining the second term in a global organization like United Nation in a competitive election is not easy. However, Nepalese candidate Bandana Rana makes it for a second term securing a wider margin of the vote.

Her victory is not only her personal one but it is a victory of the Nepal government’s stand and commitment as well. With her well-articulated capacity, Rana strongly put Nepal’s progress in a global forum to become a cause to win the elections.

Although the Nepal government has backed her candidacy and use all its goodwill to gain support for her, Rana’s individual capability as well as her modest approach also worked.

How a coincidence, Prime Minister K.P Sharma Oli led government is in power both the nomination. RPP leader Kamal Thapa was foreign minister to back her candidacy for the first tenure and Nepal Communist Party leader Pradeep Gyawali is a foreign minister now.

She obtained 137 votes, the third-highest among 19 candidates contesting the election. She was one of the eleven candidates elected for the term of 2021-2024. Experts from the Netherlands, Bahamas, Lithuania, Ghana, Australia, Mexico, Lebanon, France, Philippines and China were also elected.

Currently the Vice-chair of the CEDAW Committee, Ms. Rana is the first Nepali national serving in the Committee. She has over three-decade-long experiences of working in the field of gender equality and women's rights.

Following the elections, the Leader of the Nepali delegation to the 21st Meeting of the States Parties to the Convention Ambassador Mr. Amrit Bahadur Rai stated that Ms. Rana’s re-election was a recognition of her proven expertise and experiences. This is also an acknowledgment by the international community of Nepal’s sincere efforts in implementing the Convention and its Optional Protocol as well as an appreciation of the achievements we have made in the promotion of women's rights in particular and human rights in general, he said.

Upon being re-elected, Ms. Bandana Rana expressed gratitude to the Government of Nepal and all States Parties for their support and cooperation. She pledged to continue working to the best of her ability and adding value to the work of the Committee.

The Convention on the Elimination of All Forms of Discrimination Against Women was adopted by the UN General Assembly in 1979 and came into force in 1981. The number of its States Parties today stands at 189. Nepal became a State Party to the Convention in 1991, and also acceded to its Optional Protocol in 2007.

The CEDAW Committee is a UN Human Rights Treaty Body consisting of 23 independent experts elected by the States Parties to the Convention. The experts serve in their personal capacities.

With so many diversities and differences, blocks and groups, contesting and winning elections require a lot of effort, supports and personal quality. Having founder members of some best organizations back home in Nepal and worked some tangible works with diverse groups, Rana knows the arts of living and working together.

Among Nepali women activists, Rana is moderate. Even in the most difficult times, Rana saved herself from the attack of extremists who have made every effort to knock out her. Her patience, courage, dedication and most importantly the moderate views help her to be a leader at the global level.

Started her carrier from Nepal Television, Rana, a journalist, proves herself how to be successful not only in the global level but also at national and household levels as well. Along with global acceptability, she proves herself as a well-accepted activist at the national level and finally, she also proves as a good family manger keeping as a wife, mom and grand-mom.

Nepal Army Collects Over 30,000 KG Of Wastes From Major Mountains By Agencies 18 hours, 31 minutes ago