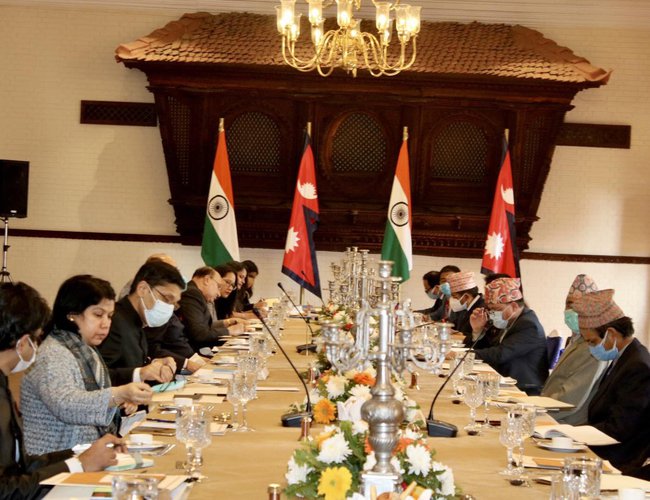 According to a press release issued by Ministry of Foreign Affairs, they discussed ways to strengthen the strong cultural and civilizational bonds that exist between the two countries and further build on the solid foundation of the multifaceted friendly relations for the benefit of the two countries and peoples.

The two sides also reviewed with satisfaction the progress made with regard tothe bilateral cooperation projects, including the key connectivity projects and post-earthquake reconstruction work.

They also discussed the boundary matters and exchanged views on completing the boundary work in the remaining segments.

The two sides shared their experiences on the efforts made to fight against Covid-19 pandemic.They discussed matters related to cooperation in the context of the progress made by India towards the development of Covid-19 vaccines. The Foreign Secretary of Nepal expressed appreciation to the Government of India for the support of Covid-19 related medical supplies and equipment to Nepal.

The meeting was held in an atmosphere of utmost cordiality and friendship.

The Foreign Secretary of India handed over 2000 vials of Remdesivirtothe Hon. Minister for Foreign Affairs in a ceremony held at the Ministry of Foreign Affairs.

The Foreign Secretary of India arrived in Kathmandu this morning and is scheduled to return to New Delhi tomorrow.

INGOs And NGOs Are Close Partners Of The Government: Minister Regmi By NEW SPOTLIGHT ONLINE 1 day, 4 hours ago