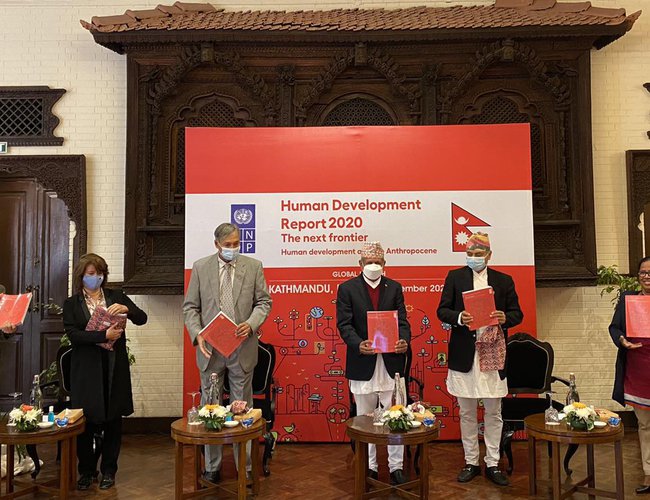 The Global Human Development Report 2020, a flagship publication of the United Nations Development Programme (UNDP) was launched in Kathmandu today.

Minister for Foreign Affairs Hon. Mr.Pradeep KumarGyawali launched the report in the presence of representatives from the government, development partners, civil society organizations, the private sector and the media.

The report was also launched in all seven provinces by the chief ministers of the respective provincial governments. Addressed by over 40 speakers, these eight events were attended by over 1000 people from across the country virtually. 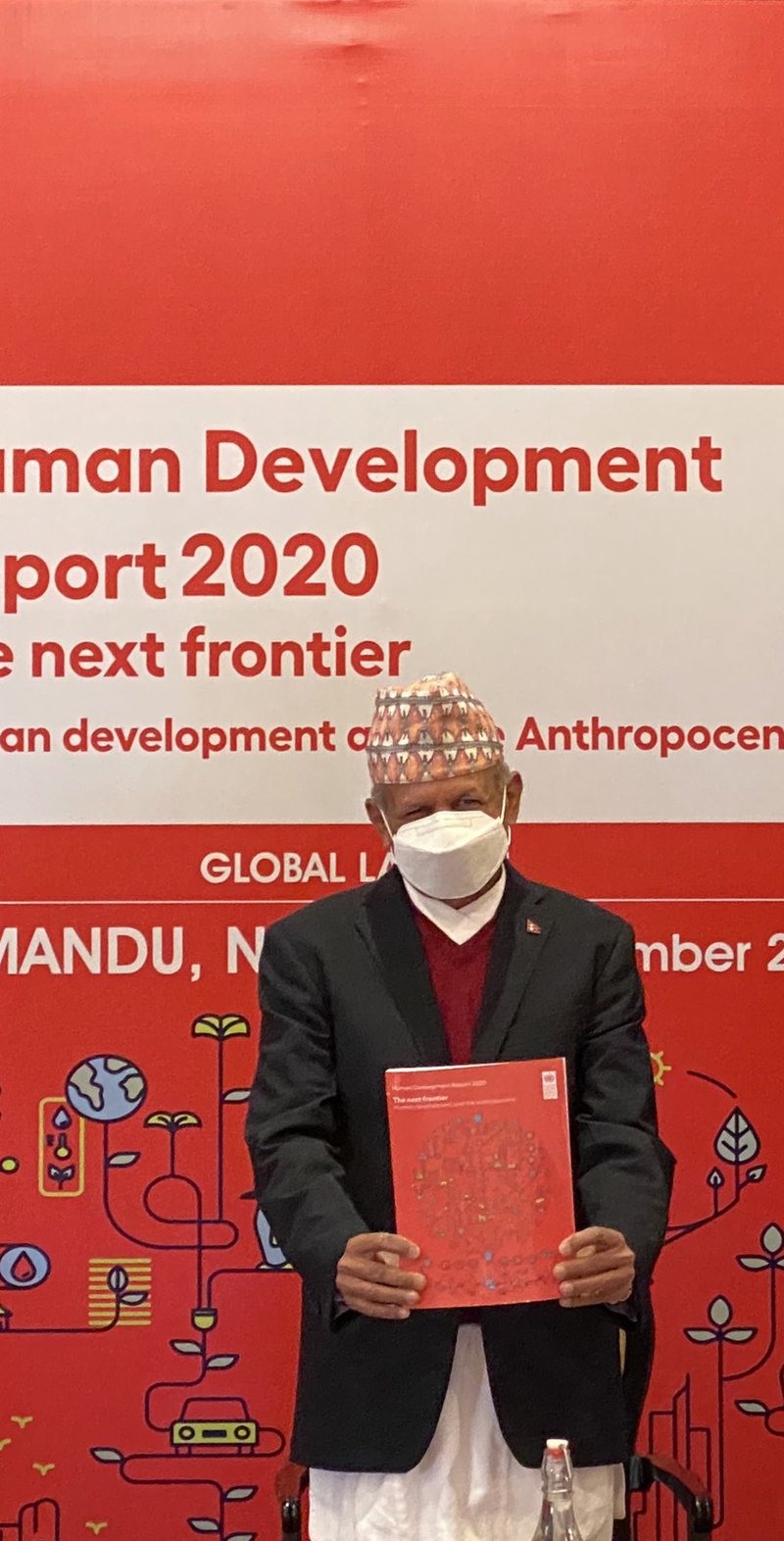 This year marks the 30th Anniversary of the first Human Development Report and of the introduction of the Human Development Index (HDI). The HDI was published to steer discussions about development progress away from GPD towards a measure that genuinely “counts” for people’s lives. Introduced by the Human Development Report Office (HDRO) thirty years ago to provide a simple measure of human progress – built around people’s freedoms to live the lives they want to - the HDI has gained popularity with its simple yet comprehensive formula that assesses a population’s average longevity, education, and income.

Over the years, however, there has been a growing interest in providing a more comprehensive set of measurements that capture other critical dimensions of human development. To respond to this call, new measures of aspects of human development were introduced to complement the HDI and capture some of the “missing dimensions” of development such as poverty, inequality and gender gaps. Since 2010, HDRO has published the Inequality-adjusted HDI, which adjusts a nation’s HDI value for inequality within each of its components (life expectancy, education and income) and the Multidimensional Poverty Index that measures people’s deprivations directly.

Similarly, HDRO’s efforts to measure gender inequalities began in the 1995 Human Development Report on gender, and recent reports have included two indices on gender, one accounting for differences between men and women in the HDI dimensions, the other a composite of inequalities in empowerment and well-being. This briefing note is organized into six sections. The first section presents information on the country coverage and methodology for the 2020 Human Development Report.

The next five sections provide information about key composite indices of human development: the HDI, the Inequality-adjusted Human Development Index (IHDI), the Gender Development Index (GDI), the Gender Inequality Index (GII), and the Multidimensional Poverty Index (MPI). The tables presented in this note depict the state of human development before the COVID-19 pandemic based on available data for 2019 and earlier years.

Data reflecting changes caused by the COVID-19 pandemic and its socioeconomic fallout in 2020 will be available in 2021 and will be presented in tables and related analyses of the 2021 Human Development Report. It is important to note that national and international data can differ because international agencies standardize national data to allow comparability across countries and in some cases may not have access to the most recent national data. 2 1- Country coverage and the methodology of the 2020 Human Development Report presents the 2019 HDI (values and ranks) for 189 countries and UN-recognized territories, along with the IHDI for 152 countries, the GDI for 167 countries, the GII for 162 countries, and the MPI for 107 countries.

It is misleading to compare values and rankings with those of previously published reports, because of revisions and updates of the underlying data and adjustments to goalposts.

Small changes in values should be interpreted with caution as they may not be statistically significant due to sampling variation. Generally speaking, changes at the level of the third decimal place in any of the composite indices are considered insignificant. Unless otherwise specified in the source, tables use data available to HDRO as of 15 July 2020. All indices and indicators, along with technical notes on the calculation of composite indices, and additional source information are available online at

An experimental global index offers a new measurement of human progress that illustrates the challenge of tackling poverty and inequality while easing planetary pressure.

New York, 15 December 2020 – The COVID-19 pandemic is the latest crisis facing the world, but unless humans release their grip on nature, it won’t be the last, according to a new report by the United Nations Development Programme (UNDP), which includes a new experimental index on human progress that takes into account countries’ carbon dioxide emissions and material footprint.

The report lays out a stark choice for world leaders - take bold steps to reduce the immense pressure that is being exerted on the environment and the natural world, or humanity’s progress will stall.

“Humans wield more power over the planet than ever before. In the wake of COVID-19, record-breaking temperatures and spiraling inequality, it is time to use that power to redefine what we mean by progress, where our carbon and consumption footprints are no longer hidden,” said Achim Steiner, UNDP Administrator.

“As this report shows, no country in the world has yet achieved very high human development without putting immense strain on the planet. But we could be the first generation to right this wrong. That is the next frontier for human development,” he said.

The report argues that as people and the planet enter an entirely new geological epoch, the Anthropocene or the Age of Humans, it is time to for all countries to redesign their paths to progress by fully accounting for the dangerous pressures humans put on the planet, and dismantle the gross imbalances of power and opportunity that prevent change.

By adjusting the HDI, which measures a nation’s health, education, and standards of living, to include two more elements: a country’s carbon dioxide emissions and its material footprint, the index shows how the global development landscape would change if both the wellbeing of people and also the planet were central to defining humanity’s progress.

With the resulting Planetary-Pressures Adjusted HDI – or PHDI - a new global picture emerges, painting a less rosy but clearer assessment of human progress. For example, more than 50 countries drop out of the very high human development group, reflecting their dependence on fossil fuels and material footprint.

Despite these adjustments, countries like Costa Rica, Moldova, and Panama move upwards by at least 30 places, recognizing that lighter pressure on the planet is possible. “The Human Development Report is an important product by the United Nations. In a time where the action is needed, the new generation of Human Development Reports, with greater emphasis on the defining issues of our time such as climate change and inequalities, helps us to steer our efforts towards the future we want,” said Stefan Löfven, Prime Minister of Sweden, the host country of the launch of the report.

The next frontier for human development will require working with and not against nature, while transforming social norms, values, and government and financial incentives, the report argues. For example, new estimates project that by 2100 the poorest countries in the world could experience up to 100 more days of extreme weather due to climate change each year- a number that could be cut in half if the Paris Agreement on climate change is fully implemented.

And yet fossil fuels are still being subsidized: the full cost to societies of publicly financed subsidies for fossil fuels - including indirect costs - is estimated at over US$5 trillion a year, or 6.5 percent of global GDP, according to International Monetary Fund figures cited in the report.

Reforestation and taking better care of forests could alone account for roughly a quarter of the pre-2030 actions we must take to stop global warming from reaching two degrees Celsius above preindustrial levels.

“While humanity has achieved incredible things, it is clear that we have taken our planet for granted,” said JayathmaWickramanayake, the UN Secretary-General’s Envoy Youth. “Across the world young people have spoken up, recognizing that these actions put our collective future at risk. As the 2020 Human Development Report makes clear, we need to transform our relationship with the planet — to make energy and material consumption sustainable, and to ensure every young person is educated and empowered to appreciate the wonders that a healthy world can provide.”

How people experience planetary pressures is tied to how societies work, says Pedro Conceição, Director of UNDP’s Human Development Report Office and lead author of the report, and today, broken societies are putting people and planet on a collision course.

Inequalities within and between countries, with deep roots in colonialism and racism, mean that people who have more capture the benefits of nature and export the costs, the report shows. This chokes opportunities for people who have less and minimizes their ability to do anything about it.

For example, land stewarded by indigenous peoples in the Amazon absorbs, on a per-person basis, the equivalent carbon dioxide of that emitted by the richest 1 percent of people in the world. However, indigenous peoples continue to face hardship, persecution and discrimination, and have little voice in decision-making, according to the report.

And discrimination based on ethnicity frequently leaves communities severely affected and exposed to high environmental risks such as toxic waste or excessive pollution, a trend that is reproduced in urban areas across continents, argue the authors.

According to the report, easing planetary pressures in a way that enables all people to flourish in this new age requires dismantling the gross imbalances of power and opportunity that stand in the way of transformation.

Public action, the report argues, can address these inequalities, with examples ranging from increasingly progressive taxation, to protecting coastal communities through preventive investment and insurance, a move that could safeguard the lives of 840 million people who live along the world’s low elevation coastlines. But there must be a concerted effort to ensure that actions do not further pit people against planet.

“The next frontier for human development is not about choosing between people or trees; it’s about recognizing, today, that human progress driven by unequal, carbon-intensive growth has run its course,” said Pedro Conceição.

“By tackling inequality, capitalizing on innovation and working with nature, human development could take a transformational step forward to support societies and the planet together,” he said. 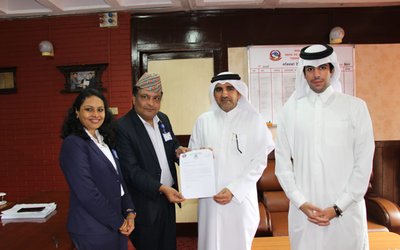