Van Exploded In US City Nashville

Van Exploded In US City Nashville 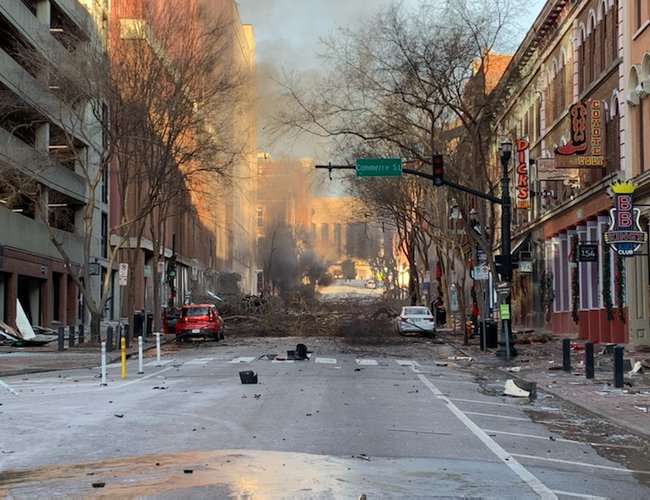 Police found what they believe "could be human remains" near the blast site. Before the motor home exploded, it blared a warning about a bomb and urged locals to evacuate.

A vehicle exploded in the downtown area of the city of Nashville, Tennessee on Friday at around 6:30 a.m. local time

Three people were injured in the blast. They were taken to hospital, but none of them were in critical condition.

Police are uncertain whether anyone was inside the RV at the moment of the blast.

Investigators found tissue that they "believe could be human remains," Police Chief John Drake said at a briefing.

"We will continue to examine that," Drake told reporters. "There are no fatalities we know of," he added.

The area was largely deserted at the time of the explosion, due to the early hour and the Christmas holiday, when most businesses are closed.

"This appears to have been an intentional act. Law enforcement is closing downtown streets as investigation continues," the Metro Nashville Police Department said.

How did events unfold?

Authorities responded to a report of shots fired on the scene, where they encountered a motor home, also known as a recreational vehicle or an RV. The RV was blaring a recording that said a potential bomb would detonate in 15 minutes.

This prompted the police to evacuate nearby buildings and call in a bomb squad. "Shortly after that, the RV exploded," Drake said in a news conference.

The blast affected a central office of a telephone exchange at telecommunications company AT&T, interrupting service.

Mayor John Cooper issued a state of emergency for the city — known as a hub for American country music — and a curfew for the area.