Columns Of Light Displayed In NY For 9/11 Victims

Columns Of Light Displayed In NY For 9/11 Victims 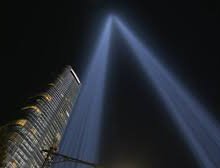 Two pillars of light recreating the Twin Towers of the World Trade Center lit the night sky in New York on Saturday to commemorate the victims of the 9/11 terrorist attacks 20 years ago.

On September 11, 2001, hijackers flew two planes into the towers. A third aircraft crashed into the Pentagon near Washington D.C., and a fourth plane into a field in Pennsylvania. The attacks killed 2,977 people.

People at the site of the World Trade Center looked up at the lights. Some took photos.

A memorial ceremony was held at the site earlier in the day. Bereaved families, as well as President Joe Biden, former presidents Barack Obama and Bill Clinton, were among the attendees.
The names of the victims were read aloud one by one during the ceremony, taking about four hours.

Memorial ceremonies were also held on Saturday in Shanksville, Pennsylvania, and at the Pentagon.