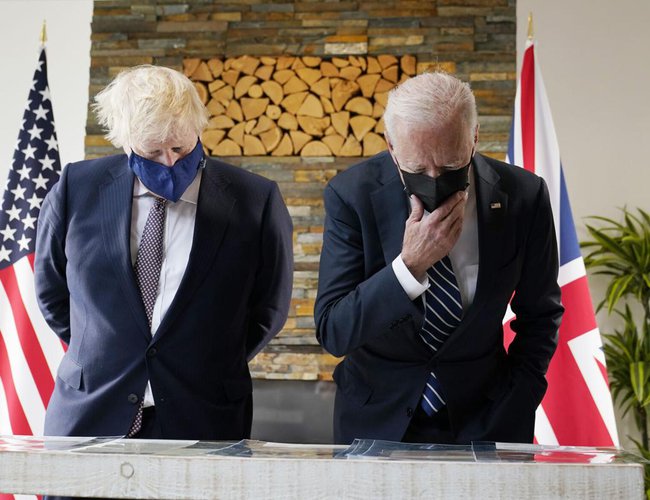 The leaders of the United States and Britain have unveiled the New Atlantic Charter on bilateral commitments. They pledge to defend democracy, in what appears to be a bid to counter China and Russia.

US President Joe Biden and British Prime Minister Boris Johnson announced the new charter after their meeting in Cornwall, England, on Thursday, the day before the opening of the Group of Seven summit.

The original Atlantic Charter was issued by the US and British governments 80 years ago. It outlined the goals of US-British cooperation to meet global challenges and led to the creation of the United Nations.

The new version says the countries "resolve to defend the principles, values, and institutions of democracy and open societies, which drive our own national strength and our alliances."

They promise to "defend key principles such as freedom of navigation and overflight and other internationally lawful uses of the seas."

The US has been emphasizing freedom of navigation and overflight in response to China's maritime activities in the South China Sea and beyond.

The charter also says the two countries "affirm our shared responsibility for maintaining our collective security and international stability and resilience against the full spectrum of modern threats, including cyber threats."

US companies have recently been targeted by cyber-attacks believed to have originated in Russia.

Biden and Johnson also released a joint statement, confirming cooperation in a wide array of areas, including the advancement of democracy, human rights and security.

The leaders say they will work together to increase the global supply of coronavirus vaccines. They say they will support "a timely, transparent and evidence-based independent process for the next phase of the WHO-convened COVID-19 origins study, including in China."

Biden said after the meeting, "We affirmed the special relationship between our people." He added, "We renewed our pledge to defend the enduring democratic values that both of our nations share that are the strong foundation of our partnership."

Analysts say Biden's reaffirmation of cooperation with Britain, a close US ally, is a way to demonstrate leadership in uniting democratic countries to counter the challenges posed by China and Russia.

Columns Of Light Displayed In NY For 9/11 Victims By Agencies 4 months, 1 week ago

Death Toll From Hurricane Ida Rises To 49 By Agencies 4 months, 3 weeks ago

Chauvin Sentenced To 22.5 Years For Floyd Murder By Agencies 7 months ago