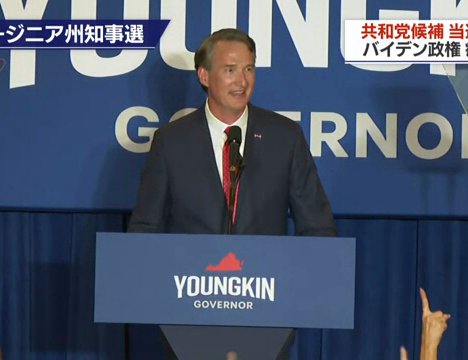 In the southern US state of Virginia, a Republican candidate has been assured of victory over his Democratic rival in a closely-contested gubernatorial election, dealing a heavy blow to President Joe Biden.

The poll on Tuesday has been widely viewed as a bellwether ahead of next year's mid-term elections.

US major media outlets reported on Wednesday that Youngkin was most likely to win.

Former President Donald Trump expressed his support for Youngkin. However, the former businessperson has kept a distance from Trump during the campaign, garnering support from non-affiliated voters.

Virginia was leaning toward the Democrats in recent years. President Biden easily won the state in last year's presidential race with a margin of 10 points over Trump.

Experts say President Biden's dwindling approval ratings have affected the governor's election. It appears the Biden administration has been handed a severe verdict, heading into the mid-terms.

Chauvin Sentenced To 22.5 Years For Floyd Murder By Agencies 12 months ago