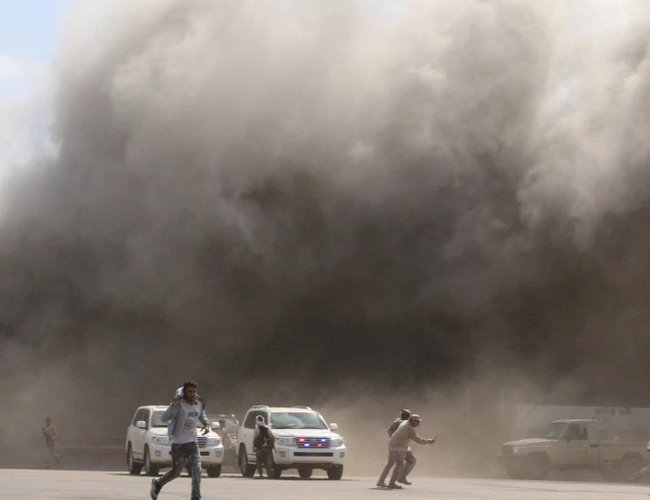 A large explosion struck the airport in the southern Yemeni city of Aden on Wednesday, shortly after a plane carrying the newly formed Saudi-backed cabinet landed there, security officials said.

Yemen’s Interior Ministry said least 22 people were killed and 50 were wounded in the blast.

The source of the explosion was not immediately clear and no group claimed responsibility for attacking the airport. No one on the government plane was hurt.

Hours after the attack, a second explosion was heard around Aden’s Maasheq presidential palace where the cabinet members including Prime Minister Maeen Abdulmalik, as well as the Saudi ambassador to Yemen, had been taken to safely, residents and local media said.

It was unclear what caused the second blast and there were no immediate reports of casualties.

Abdulmalik condemned the airport attacj as “treacherous” and “cowardly”.

“This treacherous, cowardly and terrorist attack, places the government at the heart of its responsibilities, which is the task of ending the coup, restoring the state, spreading stability and the recovery of our country,” Abdulmalik said.

Yemen’s Information Minister Moammar Al-Eryani blamed the attack on the Iran-backed Houthi rebels, adding that all the members of the government were safe.

“We assure our great people that members of the government are fine, and we assure you that the cowardly terrorist attack by the Iran-supported Huthi militia will not deter us from carrying out our patriotic duty,” he said on Twitter.

The Houthis denied responsibility for the attack.

The UN special envoy for Yemen, Martin Griffiths, condemned the explosion as an “unacceptable act of violence.” He said in a tweet that the attack was “a tragic reminder of the importance of bringing #Yemen urgently back on the path towards peace.”

Yemen’s government was sworn in on December 18 by President Abd Rabbu Mansour Hadi, as part of a power-sharing deal brokered by Saudi Arabia in 2019.

Headed by Prime Minister Abdulmalik, the new government represents Yemen’s northern and southern areas with equal numbers of members for each region.

Its formation is the result of a compromise between the UAE-backed separatists in the Southern Transitional Council and Saudi-backed loyalists of President Hadi.

It’s meant to end military clashes between those parties, so they can fight as allies against the Houthi rebel movement.

The new government was formed under the auspices of Riyadh, which leads a military coalition against the Houthis, who took control of the capital Sanaa in 2014.

Hadi has lived in the Saudi-capital Riyadh since Sanaa fell to the Houthis.

The blasts underscores the dangers facing Hadi’s government in the port city which was a scene of bloody fighting between forces of the internationally-recognised government and the UAE-backed separatists.

Last year, the Houthis fired a missile at a military parade of newly graduated fighters of a group loyal to the UAE at a military base in Aden, killing dozens.

Afzal Ashraf, a defence analyst and assistant professor of international relations at the University of Nottingham, told Al Jazeera the airport attack does not bode well for Yemen’s newly formed cabinet.

“This continues to fragment and complicate an already complex and unnecessarily difficult situation which is causing enormous distress to innocent civilians.”

Yemen, the Arab world’s poorest country, has been engulfed in civil war since 2014, when Houthi rebels overran the north and Sanaa. The following year, a Saudi-led military coalition intervened to wage war on the Houthis and restore Hadi’s government to power.

The war has killed more than 112,000, including thousands of civilians. The conflict also resulted in the world’s worst humanitarian crisis.

COVID-19 Kills Over One Million In US By Agencies 2 days, 14 hours ago

Ukrainians Forces Continues Their Fighting Against Russians By Agencies 2 days, 14 hours ago

Russia Agree To Evacuate Wounded Soldiers From Azovstal By Agencies 3 days, 15 hours ago