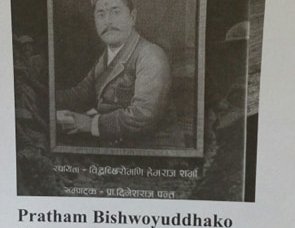 Although thousands of Nepalese soldiers took part in the first world war under the umbrella of the Great Britain and many lost their lives, only a few books have described Nepal’s participation in the war.

Thanks to the initiative and effort of Prakas A. Raj, the grand son of scholar late Sharma, a book is published in Nepal which detailed Nepal’s participation in the First World War.

Collected by late Sharma as a daily diary, the book is the first of its kind to show how Nepalese soldiers were recruited, deputed and compensated for their sacrifice in the war.

From the establishment of War Office by Chandra Sumsher and his message to the nation in the pretext of the First World War, the book is the first of its kind which has published the entire process of recruitment for the various positions required in the army.

As a scholar with his access to various sources of information particularly newspaper published from Kolkata, late Sharma details the reason behind the war and also draws the conclusion.

He mentions the alliances of the first world war, Russia, France and the Great Britain against Germany led alliance. Showing Austria’s relations with Russia and Germany, the book is full of facts and analyses of the First World War.

Due to author’s closeness with Ranas, particularly prime minister Chandra Shumsher, scholar Sharma had access to information with different sources.

It seemed that scholar Sharma, who was appointed to look at the War Office, was also responsible to analyze the event of the war and to present to the rulers. 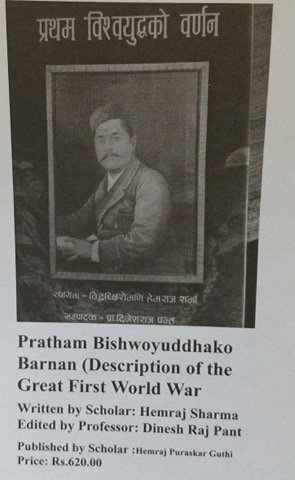 However, scholar late Sharma honestly kept a copy for his own collection. At a time when sources of information regarding Nepal’s participation in the first world war were rare, this book has filled the gap to an extent.

For scholars and researchers who want to write on Nepal’s participation in the first world war and Nepal’s contribution, this book can be used as a main source.

With the intense analysis of contemporary world through the secondary information gathered through the newspapers published from India and the discussion with British residences based in Kathmandu, scholar Sharma had shown his high quality analysis capability to see the First World War from far away country like Nepal.

Not only the salary sheet of soldiers, their diet and other facilities provided to them, the author also collected all the information regarding the deployment of Nepalese soldiers and the sketch their departure schedule.

Although the Great First World War concentrated in Europe and the countries involved in the war included Europeans, Nepal backed British due to its close military alliance. For the first time, large numbers of Nepalese soldiers reached different parts of Europe siding with British.

These soldiers returned to Nepal after Britain led alliance announced the victory and surrender of German Empire and its alliance.

Thanks to Prakash A Raj, professor Dinesh Raj Panta, Nepalese readers have found the first book to learn about how Nepal managed to send its soldiers and what the terms and conditions, remuneration and benefits, provided to Nepalese soldiers who went to Europe as part of the forces of British Power, were like.

For years, Nepalese historians relied on the British and Indian archives to learn of Nepal’s participation in the world war. However the publication of the book has ended the information gap. This book represents a true part of Nepal’s state in the first world war and its participation.

Ganga To Mississippi: Walking With The Rainbow By A Correspondent 4 months ago