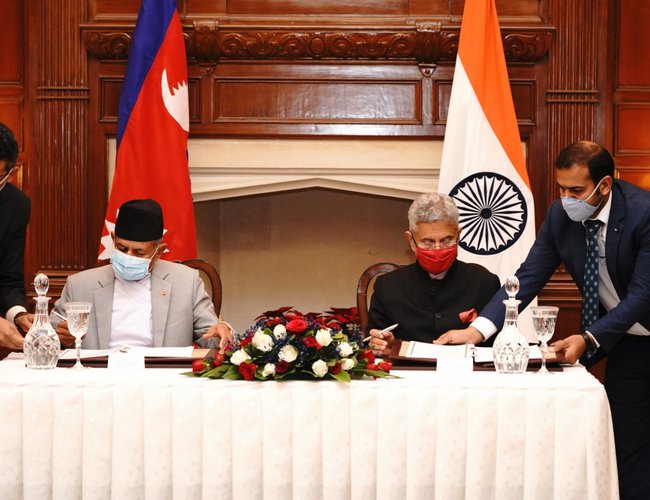 On Nepal’s request for the Government of India’s support in availing Covid-19 vaccines, the Indian side assured that the requirements of Nepal would be in priority consideration after the roll-out of vaccines.

During the Sixth Meeting of the Nepal-India Joint Commission, which was held in New Delhi today, both sides reviewed the entire spectrum of bilateral relations that included the important areas of Covid-19 vaccine, boundary and border management, connectivity and economic cooperation, trade and transit, power and water resources, and culture and education, among others.

Pradeep Kumar Gyawali, Minister for Foreign Affairs and His Excellency Dr. S. Jaishankar, Minister of External Affairs of India co-chaired the Meeting as leaders of the respective delegations.

Nepal and India discussed the boundary matter and expressed the commitment to early completion of the boundary works in the remaining segments.

According to a press release issued by the Embassy of Nepal, New Delhi, the Joint Commission appreciated the close coordination between the two sides in facing the challenges posed by the Covid-19 pandemic. The Nepali side thanked the Government of India for its assistance of essential medicines and medical equipment.

The Meeting discussed the boundary matter and expressed the commitment to early completion of the boundary works in the remaining segments. It also discussed the review of the Peace and Friendship Treaty of 1950, submission of the report of the Eminent Persons Group, and air entry routes.

The meeting agreed to further speed up the implementation of the ongoing and planned bilateral projects such as the new Integrated Check Posts/Inland Container Depot, including at Dodhara-Chadani, remaining cross border railways, roads, and transmission lines, among others.

The Joint Commission deliberated on the progress in the discussions held between the two sides to review the bilateral treaties on trade, transit and rail services. Both sides agreed for an early conclusion of the review of Treaty of Trade, Treaty of Transit and the amendments to Rail Services Agreement with a view to further strengthen cooperation in these fields. Progress in the operationalization of connectivity through inland waterways was also discussed.

The meeting agreed to expedite the work for 400 Kv Butwal-Gorakhpur cross-border transmission line. Reiterating the importance of Pancheshwar Multipurpose Project and taking note of the positive discussion at the recent bilateral meeting of the Secretary-level delegations held in New Delhi, the Joint Commission agreed for early finalization of the project DPR. The Meeting also deliberated on the inundation problems facing people living in border areas especially due to non-tagging of embankments, interlinking of drains, and inadequate drainage provision.

The Nepali delegation to the meeting included Nilamber Acharya, the Ambassador of Nepal to India, Bharat Raj Paudyal, the Foreign Secretary, Laxman Aryal, Secretary, Ministry of Health and Population and the officials of various ministries, departments and the Embassy.

The External Affairs Minister of India hosted a luncheon for the Minister for Foreign Affairs and the members of his delegation.

The Nepal-India Joint Commission was established in 1987 with a view to review and further strengthen all aspects of bilateral relations.

Also today, Minister Gyawali gave a talk at the Indian Council of World Affairs (Sapru House) on ‘Nepal-India Relations’ and interacted with the distinguished audience comprising of former ambassadors, academics, think-tank analysts and media persons, among others.

Nilamber Acharya, the Ambassador of Nepal to India, hosted a dinner this evening in the honour of Minister and members of his delegation.

The Foreign Minister arrived at New Delhi yesterday to participate in the meeting as its co-chair.

European Parliamentarian Delegation: Visit For Cause By NEW SPOTLIGHT ONLINE 5 days, 7 hours ago