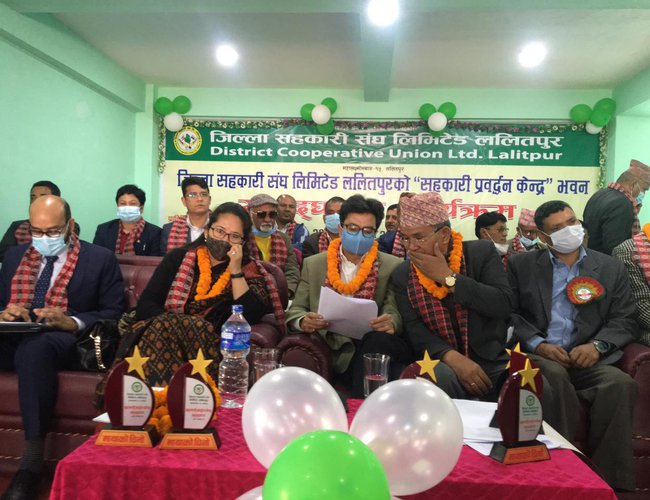 The new building of the Cooperative Union built under ‘Nepal-Bharat Development Cooperation’ has three floors, a multipurpose basement, ground and second floors. The first floor will be used for open market, second floor has office and training rooms, multipurpose hall, a resource center, cafeteria and part of the multipurpose basement will also be used for parking. The project was taken up as a High Impact Community Development Project and implemented by District Coordination Committee, Lalitpur.

Since 2003, India has completed 446 high impact community development projects in Nepal, of which 84 are in Province 3, including 9 in Lalitpur District. In addition to above the Embassy of India has gifted 18 ambulances and 9 school buses to various health posts, NGO and educational institutes in Lalitpur District.

Established in 1972, the District Cooperative Union Ltd. Lalitpur (DCULL) has about 765 cooperatives as its member societies with over 3,50,000 membership. It has a mandate to lead, support, coordinate and promote activities of its member cooperatives, to develop and strengthen farming communities. The newly constructed Cooperative Promotion Centre is envisaged to enhance the marketing capability of the cooperatives and their farmer members and establish direct linkage between farmers and consumers. The building is also structured to serve as an Information Centre for people who have interest in the field of marketing agricultural products.

India has been a steadfast and development partner of Nepal. Though this project, the Embassy of India complements the effort of Government of Nepal in augmenting infrastructure in the field of agriculture marketing sector. In the last two years, India has also trained 59 agriculture scientists, farmers and agriculture policy makers in the areas of organic farming, soil testing and fertilizer science in premier Indian agriculture centers in National Capital Region of Delhi. Both Governments are also working towards establishing model veterinary hospitals and veterinary laboratories in Nepal.

Excited To Be In Beautiful Nepal: Under Secretary Uzra Zeya By NEW SPOTLIGHT ONLINE 1 day, 1 hour ago

Korean INGO UHGHF To Buil A School In Dailekh By Agencies 2 days, 2 hours ago