It Was Not A Good Signal To Boycott The Tea Reception Invited By Party Chair: PM Oli

It Was Not A Good Signal To Boycott The Tea Reception Invited By Party Chair: PM Oli 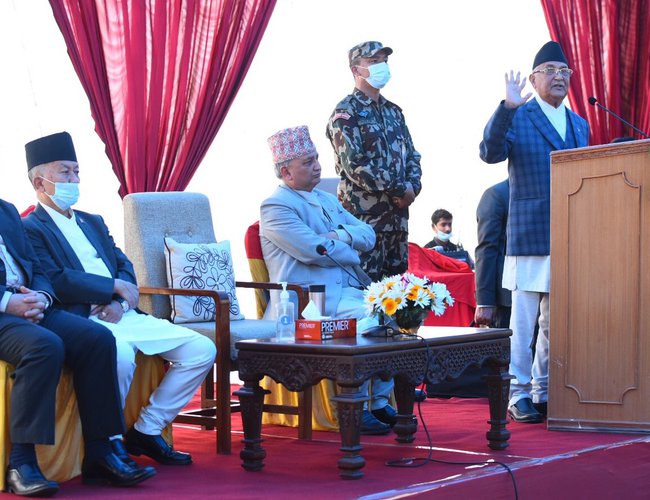 Prime Minister and CPN (UML) Chair, KP Sharma Oli has that it was not a good signal to boycott the tea reception organized and invited to by the party Chair, he urged the Nepal faction to put off the gathering they have planned for tomorrow as there is still some time left for that reports RSS.

He appealed one and all not to organise and make others organize any kind of factional gathering in the name of the party reports RSS.

Addressing the tea reception for the party's central members and lawmakers at the Prime Minister's residence in Baluwatar today, he urged the party leaders and cadres not to participate in any group meetings and stand for the party unity.

"I want to alert the UML leaders and cadres to not to organize or have organized, participate in, go to and attend the factional gathering tomorrow. I urge one and all to stay in favour of party unity," PM and party chair Oli said.

He said although the party has reverted to the status it was before 17 May 2018, some of the colleagues in the party were picking up quarrel by organizing gatherings of party leaders and cadres separately. Party chair Oli said nobody had the leeway to carry out works and activities that are anarchic, undisciplined and go against the party's statute and standard operating process and unity.

According to RSS, CPN (UML) Chair Oli said: "It cannot be – not allowing the party to be run as a party and always playing the spoiler. We all should be united in our individual basis and work centering the ideology and principles in the party."

The Prime Minister and party chair's these remarks come in view of the national cadres' gathering said to be organised by the party senior leader Madhav Kumar Nepal side on Wednesday and Thursday.

He warned not to think of taking to task the party through intimidation tactics. The party Chair said he will not abandon truth but not bow down to bullying reports RSS.

PM and the party Chair vowed that he would not do injustice to the party leaders and cadres. "There will not be injustice against anyone in the party. There've been big offences (by the dissident side) but still we have shown a large heart. I don't say welcome to those committing big offence. We accept those who join the party after correcting themselves."

POLITICS Uncertain Future By A Correspondent 3 days ago