Isn’t This The Time, Honorable Minister, That Nepal Will Make The Change In Your Voting Pattern?

With your permission, the honorable Minister, I would like to try to explain this close friendship. What are the reasons for such a level of trust? 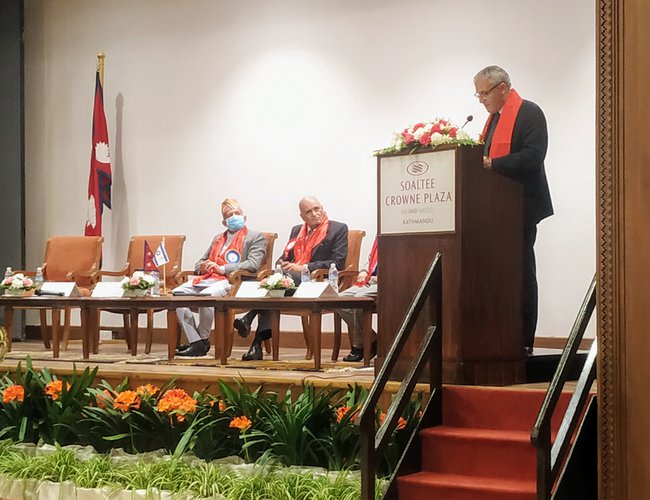 This year we have marked 60 years for the courageous step taken by BP Koirala to establish relations with Israel. Much was said by early speakers on this move so I will only add here: Israel will never forget that Nepal was the first one and for many years, the only one from this part of the world to have such relations. Let me also add after so many others are mentioned- the good bilateral relations on all levels of cooperation and they are indeed so many.

With your permission, the honorable Minister, I would like to try to explain this close friendship. What are the reasons for such a level of trust? How come Nepal is kept as a dream in the minds of young generation Israelis that have made Nepal into part of their maturing process including spending months of trekking or community work in different parts of Nepal? What are the reasons that make Israel be the most prestigious and lucrative destination for Nepali workers? Why is that Nepali workers or students that return from Israel talk about this country with such appreciation? What are the reasons that made 200 Israeli Doctors and medical team, to leave all that they were doing and come to help Nepal within36 or 48 hours after the devastating Earthquake of 2015?

You can mention the "Learn and Earn" program which is changing the faces of Nepalese in rural areas today and you can also mention thousands of members of Shalom Club that were trained in Israel or thousands of those who spent years with Israeli families as caregivers. All is right and all is relevant.

However, each one of the points that I just mentioned will need a long background and complete explanation to understand. Each one will have a long list of details but they all share one element, which plays an important role in this intimate relationship:

It all starts when we look at ourselves in the mirror and try to identify and determine who we are: we see ourselves, Nepalese and Israelis as part of small entities, small cultures, surrounded by big neighbors. Our identity is important for us and we will do any possible action to keep, preserve and protect it. We are proud nations that are proud of what we are and who we are. From here will come all other explanations. Israel has no global interests in Nepal and it is the same when we talk about Nepal's interest in Israel. Even the topic that keeps us very much apart, became a major issue of cooperation between the two countries, and I talk about the alliance made between Mount Everest (Sagarmatha), and the Dead Sea: the highest and the lowest places on earth which both countries issued stamps on the same day and later established monuments on both sites.

All this was fine if we could conclude this seminar on Bilateral relations, however, relations between countries stand on two legs: one is this excellent leg of the bilateral leg but the second leg is the multilateral leg.

Yes, the second leg is less famous, less known and has much lower visibility. It does not happen -not in Israel and not in Nepal. The multilateral relations take place mainly in the UN building in New York and in the Human Rights Council in Geneva, and sometimes in other locations. The "over attention" and double standards were taken by these international organizations lead to 26 anti-Israeli resolutions that are brought to vote every year. Yes, our world that suffers from long international changes like health, poverty, lack of development, and lack of democratic values, find time to bring these votes every year as an endless ritual going in circles that bring the region where Israel is located to useless votes that have led nowhere. But let me remind all that recently, we see some hope when four and soon other countries in the Middle East established formal relations with Israel. The change is happening now.

Isn’t this the time, Honorable Minister, that Nepal will make the change in your voting pattern? Isn't it time that the excellent bilateral relations will reflect on the multilateral relations? Isn’t it time Nepal's neutrality in international conflict will include the votes that involve Israel?

I said earlier that relations have two legs: the bilateral and the multilateral. Standing on one leg, for too long, is not good for stable and cordial relations as we all believe Nepal and Israel should have.

I can only quote again, what the former speakers just said: it is the time that both bilateral and multilateral levels are also reflected in the voting pattern of Nepal at the UN as well as other global forums.

Let me use this opportunity, the honorable Minister, to thank you for your personal friendship and your good involvement in promoting the relations between our two sisterly nations. Long live the Nepal-Israel relations!

Hanan Goder-Goldberger is the Ambassador of Israel to Nepal. This is the excerpt of the speech delivered during the seminar on Nepal-Israel Relations.

"A Maritime Agreement… And Oceans Of Benefits For Both Israel And Lebanon"
Oct 31, 2022
Israel And Nepal Are Small But Proud Nations That Are Proud Of What We Are And Who We Are
Jun 01, 2022
Nepal Was And Will Always Be A Country That We Will Be Proud To Continue Our Cooperation
May 20, 2022

Youths In Nepal Elections: From Social Media To National Platform By Sangya Dhakal 1 day, 1 hour ago

Skeleton In The Sandook By Hemant Arjyal 1 day, 23 hours ago

An Overture Filled with Confusion By Dr. K. Uprety 3 days, 6 hours ago