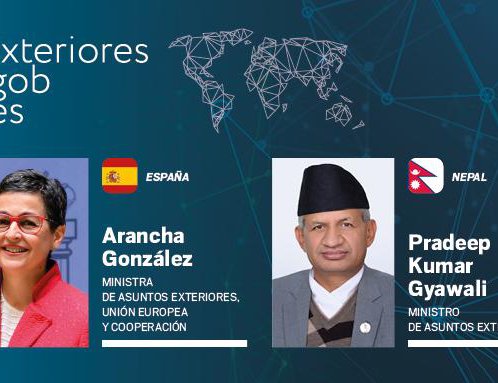 The Government of Spain is sending a consignment in a chartered flight tomorrow that will include ventilators, oxygen concentrators and PPEs.

Magdy Martinez Soliman, Director of the Spanish agency for International Development Cooperation (AECID) is visiting Nepal to hand over the Spanish cooperation to the Government of Nepal.

Minister Gyawali thanked the Government of Spain for its generous support of medical equipment and supplies. He stated that the support received from the friendly Government and people of Spain would be valuable at a time when Nepal is battling the surge of new variants of COVID-19.

Minister Gonzalez Laya, while thanking Nepal for facilitating repatriation of stranded Spanish nationals, assured Nepal of continued cooperation from her Government at the bilateral level as well as through the EU and other channels.

International Flights Resume At TIA By Agencies 20 hours, 14 minutes ago