Democracy At Stake In Nepal

If the political Opposition resolves to fight back, it is likely that the new republic will gain in the long term 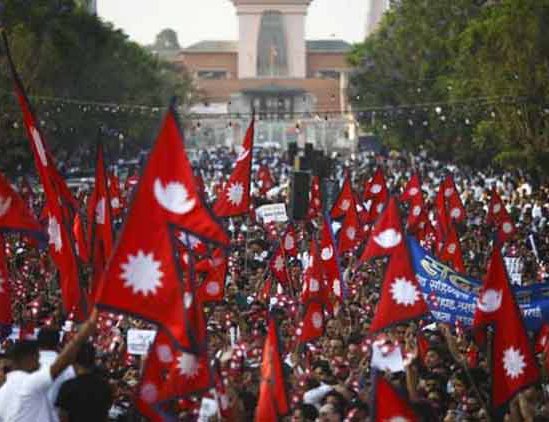 Nepal is facing its severest political crisis in decades. The repeated dissolution of Parliament, from last December to May this year, is not just a manifestation of the power struggle between political parties and leaders in Nepal but also a dangerous game plan by national and international forces to dismantle the federal republican democratic Constitution and restore the old Hindu monarchical state. It is really anachronistic that the so-called Marxist-Leninist party headed by Prime Minister K.P. Sharma Oli is in collusion with Hindu monarchical forces in Nepal and the Rashtriya Swayamsevak Sangh in India. A section of the Janata Samajbadi Party (JSP) led by Mahanta Thakur and Rajendra Mahato have been lured or forced to join hands with Mr. Oli, who is notorious for his anti-Madhesh tirade till the other day.

Even when India’s political and diplomatic culture saw a departure from best past practices, it was expected that its official regime would always support multiparty democracy, progressive political action and changing fundamentals.

Contrary to this, India is being seen backing an autocratic and unconstitutional regime, surviving in ‘caretaker mode’ with the connivance of Nepal’s President Bidya Devi Bhandari and Mr. Oli. In helping an unpopular and illegitimate regime in Kathmandu, the game-plan seems to be to derail the Constitution and plunge the country into endless crisis. It is impossible to understand how this will benefit either India or Nepal, especially when the establishment in New Delhi seems to be hell bent on turning Nepal into a Hindu state and scrap federalism as well (ultimately disempowering oppressed Madhesis, Tharus, Janajatis, women and others). The statement by India’s Ministry of External Affairs, that “political developments in Nepal are the country’s internal matters” did not help too in changing the popular perception.

If the objective is to scrap the present Constitution to undo the Kalapani-Limpiadhura map episode, why throw the baby out with the bathwater? The India-Nepal boundary issue can be resolved through serious political dialogue. There should be a trade-off between the developmental aspirations of Nepal and the strategic concerns of India, in the light of changing geopolitical dynamics in the Himalayan region. India should do course correction and should not throw its weight behind an autocratic regime; it must reassure all who care for the peace and the prosperity of Nepal by reposing faith in Nepal’s democracy and due processes. Also, India must fulfil the promises it made for COVID-19 vaccines to Nepal. The glaring gap between the promises made and delivery has been a big disappointment; people should never be kept in lurch like this.

The twists and turns

It is in the public domain that the Opposition alliance in Nepal filed a petition in the Supreme Court last week demanding that the Nepali Congress’s Sher Bahadur Deuba be declared the new Prime Minister and the House of Representatives be reinstated. As many as 146 members of the dissolved House of Representatives — 61 from the Nepali Congress, 49 from the Communist Party of Nepal (Maoist Centre), 23 from the Madhav Nepal faction of the CPN-UML, 12 from a section of the JSP and one from the Rastriya Janamorcha Nepal — have signed the petition, challenging Mr. Oli and Ms. Bhandari’s House dissolution moved late on the night of May 21 and disqualified Mr. Deuba’s claim that he be appointed Prime Minister. Representing the Opposition alliance, Mr. Deuba had presented the signatures of 149 lawmakers to prove that he commanded the majority to lead a new government in this crisis phase when Nepal is witnessing an unprecedented crisis with the novel coronavirus pandemic and an abjectly poor counter-response by the Oli-occupied regime. Without any delay in subverting constitutionally due procedures, Mr. Oli too made a ridiculous claim that he be appointed Prime Minister, while technically still being the Prime Minister, falsely claiming to have the backing of 153 lawmakers. Since the plot was scripted, he failed to name those lawmakers. After the President disqualified both claims as the most suitable possibility for Mr. Oli, he, through a dramatic midnight Cabinet meeting, recommended the House’s dissolution. The President duly obliged him and his autocratic manoeuvring that have hammered democratic principles and national interest. Alas!

For the manner in which Ms. Bhandari has acted to keep Mr. Oli in power and undermining her constitutional role as the first citizen of the country, impeachment will be the easiest exit route for her.

A graceful exit is not an idea tempting enough for her and Mr. Oli; so going in for the lawful provision of impeachment is a prerequisite to restore eroded faith in the presidential position and due processes. Ms. Bhandari’s role in public life has been questioned earlier too, as she, as the President of a new democracy, did all possible to weaken the system and make Mr. Oli a walking authority above the Constitution. Never ever was she deterred by fierce public criticism and continued her business as usual with Mr. Oli. In a press conference recently, Mr. Oli said, “Disrespect for the President is disrespect for the republican system. In a monarchy, there is a King, in a republic system, there is a President. The President is the symbol of republicanism and an attack on the dignity of the Office of the President is an attack on the republic system.” This makes things very clear. Ironically, Ms. Bhandari and Mr. Oli are two prominent figures who have consistently disrespected and abused the President’s high office for their shared political gains — and made it subservient to the executive whims and fancies.

Mr. Oli’s sudden bout of nostalgia for the long gone monarchy is not just his bid to revisit the history but is also something in progression and from the hope he has been given by his invisible handlers and friends, in both the north and the south. He is not an original thinker. He is counting on a plan to drive the country to the brink of a constitutional crisis, stay at the helm as an authoritarian caretaker Prime Minister with an unreasonably friendly President, and force the country into elections when even the next moment is uncertain. To end their Machiavellian treachery, the Opposition alliance has to rise to the occasion and make all possible efforts to foil the unholy plan.

Nepal at the crossroads

Nepal’s quest should be to redeem its lost glory, and for the first time, avail its true development potential — and stop being a ‘theatre of the absurd’ and hosting the harmful advances of neighbours involved in geostrategic rivalries. On the domestic front, an increased focus should be on homework, instead of leveraging on vulnerabilities and the making of unruly partners. In a functional democracy, the statecraft is not supposed to be altruistic till it relies on progressive policy and governance — with an aim to augment the mission of ‘greater common goods’. Long ago, the People’s War was over in Nepal, with a transitory accomplishment of a goal in a new republic. However, the task is still unfinished till the people-centric priorities are not driving the political agenda and action.

Despite all the flaws, Nepal should protect its democracy that is now at stake because of actions by political opportunists. N-feudal actors such as Oli-Bhandari have endangered the country’s prospects. However, an accomplished democracy like Nepal will rise again.

For sure, the road ahead is not easy and it is going to be one of struggle. If the Opposition alliance makes a resolve and fights back, it is likely that the new republic will gain in the long term; the sinful nexus will stop. The big powers should take note of this.

Baburam Bhattarai is a former Prime Minister and Finance Minister of Nepal. Atul K. Thakur is a policy analyst, author and columnist.