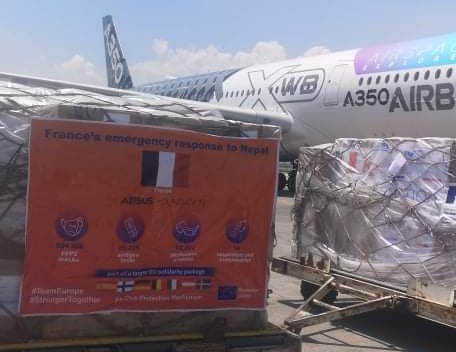 In solidarity with Nepal in its fight against the COVID-19 pandemic, the French Government has extended support of medical equipment and supplies to the Government of Nepal.

Francois-Xavier Leger, Ambassador of France to Nepal, handed over to Hridayesh Tripathi, Minister for Health and Population, the shipment containing 504,000 FFP2 masks; 20,225 antigenic test kits; 12,000 protection glasses; and 14 respirators including consumables at a brief ceremony held at the Tribhuvan International Airport this morning.

Minister for Health and Population Tripathy thanked the Government and people of France for their generous support of life-saving materials, which would be helpful in containing the surge of COVID-19 cases and treatment of the affected people. He stated that the timely support from France is reflective of the longstanding Nepal-France friendship. 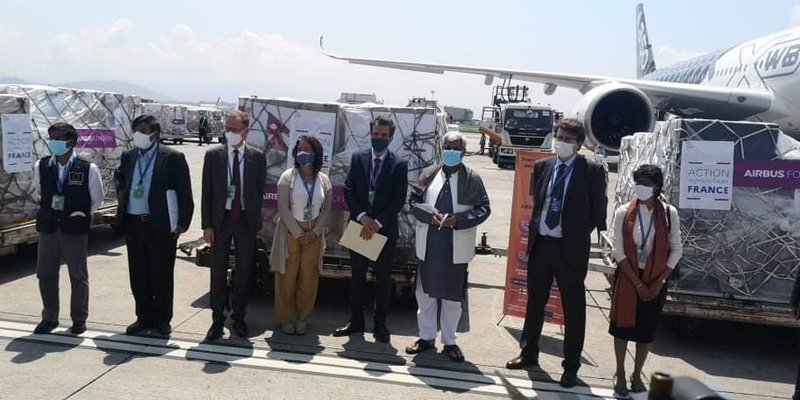 “The medical support received today is in response to the request of the Government of Nepal to the French Government, communicated at the bilateral level as well as through the European Union’s Civil Protection Mechanism, for supporting Nepal with vaccines, medicines, equipment and supplies in the face of the deadlier second wave of the COVID-19 pandemic,” said a press release issued by Ministry of Foreign Affairs.