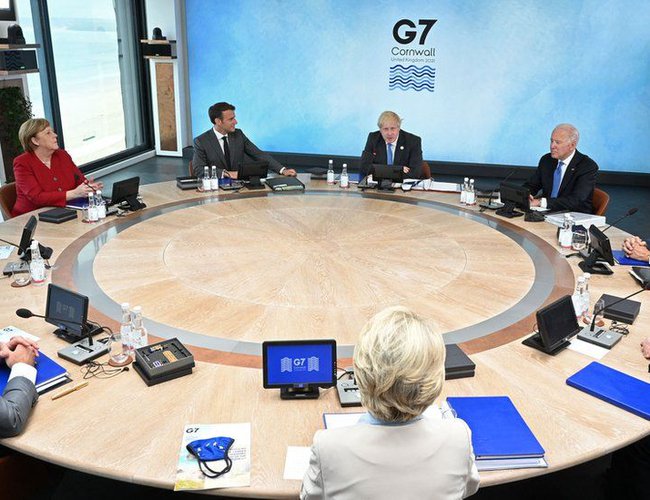 The leaders of the Group of Seven nations closed their summit in Britain on Sunday by unveiling a joint communique that mentioned China-related issues.

Among the main topics of the three-day meeting was how the leaders should address China's growing international presence.

The communique said the leaders "underscore the importance of peace and stability across the Taiwan Strait, and encourage the peaceful resolution of cross-Strait issues."

The statement said the leaders "remain seriously concerned about the situation in the East and South China Seas and strongly oppose any unilateral attempts to change the status quo and increase tensions."

The document also said the leaders will promote their mutual values, "including by calling on China to respect human rights and fundamental freedoms, especially in relation to Xinjiang and those rights, freedoms and high degree of autonomy for Hong Kong enshrined in the Sino-British Joint Declaration and the Basic Law."

They also called for a transparent, science-based, WHO-convened additional coronavirus origins study to be held in China and elsewhere.

But differences were exposed regarding how the leaders would deal with China.

US President Joe Biden told a news conference that the previous G7 summit communique did not mention China, unlike the one just issued. He said, "The G7 explicitly agreed to call out human rights abuses in Xinjiang and in Hong Kong."

French President Emmanuel Macron said the G7 is not a club that's hostile to China. He called it an ensemble of democracies that would work with China on all world topics that China is ready to work on with the G7.

Ukraine welcomes US Offer Of Long-Range Rockets By Agencies 17 hours, 34 minutes ago

US Shoots Down China's Balloon, Says Defense Department By Agencies 17 hours, 49 minutes ago