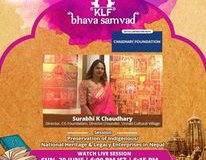 Nepalese culture incorporates the diverse heritage of Nepal's 125 ethnic groups. Music and dance, art and craft, folklore, languages and literature, philosophy and religion, festivals and celebrations, foods and drinks have all been a part of its rich historical and ethnic heritage. The long history of craftsmanship with a tradition of carving and crafting is rooted in the culture. Realising the need for conservation for this rich legacy, the Chaudhary Foundation’s newly initiated Unnati Cultural Village (UCV) at Harkapur, Nawalpur, Nepal was established in response to disappearing cultures due to increased urbanisation and modernisation.

The facility boasts of an art gallery, open-to-air museums, exhibitions of cultural manifestos and masterpieces. The Village also has a Cultural Multipurpose Hall, where cultural banquets, gatherings, meetings, and cultural exhibitions can be organized. Likewise, a separate space has been assigned for 'Kala Batika', with 18 places identified for the 'Open-Air Museum'. Artists can create artworks and exhibit them here.

Presenting an ode to southeast arts, culture, and traditions during the Bhava Samvad of Kalinga Literary Festival (KLF), Chaudhary Foundation’s Director Surabhi K Chaudhary said “I am delighted to attend the Bhava Samvad of Kalinga Literary Festival and promote the initiatives of our foundation through this coveted intellectual platform. Many traditional and contemporary skills are on the verge of extinction and a platform such as UCV will arouse interest of the new generation in traditional art forms. UCV will bring skilled people from various backgrounds together to showcase their handicraft skills and train the next generation of artisans and craftsmen.”

Nepal has been at the crux of knowledge, art, culture exchange between Southeast Asian countries and the rest of Asia. Due to prolonged exposure to the constant flow of synergies, Nepal’s own culture and art can be described as an immersive, inclusive yet diverse form. The establishment of this facility would ignite this ancient route and strengthen this, the Foundation hopes to open cultural centers across all seven provinces and UCV is a pilot project.

Following the earthquake in 2015, Chaudhary Foundation constructed more than 2500 semi-permanent shelters, 55 semi-permanent schools, 20 clean water filtration systems, and 22 digital classrooms and provided skill-based training to more than 6000 beneficiaries. A model village with 62 houses is in the process of handover in Sindupalchowk district, one of the worst earthquake-affected districts. To combat the second wave of COVID-19 in Nepal, the Chaudhary Foundation has set up an ICU ward and oxygen plants in Nepal. During the 2017 Nepal flood, Chaudhary Foundation convened its Disaster Response Team (DRT) to provide supplies and assistance to over 10,000 people (2,500 households) in severely impacted districts. Similarly, in 2018, Baliyo Nepal Nutrition Initiative (BNNI) funded by our partner, Bill & Melinda Gates Foundation, was launched in the country to combat the issue of stunting in western Nepal.