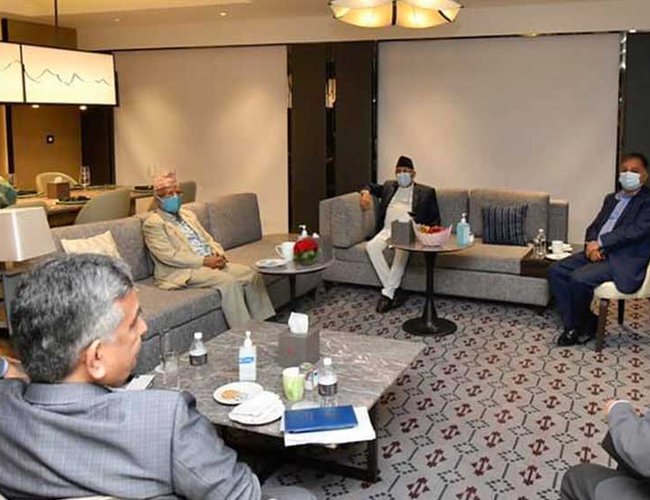 A meeting of the task force formed to resolve intraparty disputes in the CPN (UML) has reached a conclusion late this night. UML Secretary and member of the taskforce Gokarna Raj Bista said that the meeting concluded some time ago forge a consensus on the disputed issues.

The Party’s Standing Committee meeting scheduled for Sunday with the preparation to approve the agreement of the task force has also been put off till Monday while the party’s central committee meeting has been summoned at 11:00 am on July 13, CPN (UML) Central Office Secretary Sher Bahadur Tamang said.

Disputes had surfaced in the CPN (UML) after Prime Minister KP Sharma Oli dissolved the House of Representatives on May 23 despite the formation of a 10-member task force on May 16 on the basis of consensus of CPN (UML) Chairman Oli and senior leader Madhav Kumar Nepal.

After days of reunion-centered dialogues, the two rival factions of the ruling CPN-UML have finally reached a consensus on 'agreeing to agree'.

The task force formed to resolve existing issues between the two sides has struck a 10-point deal for now and will now apprise the two leaders of the agreement.

The two sides have decided to resolve all existing differences, deal with issues internally for now.

A 14-hour long meeting of leaders representing the dissident sides facilitated the possible coming together of party chair Prime Minister KP Sharma Oli and senior UML figure Madhav Kumar Nepal, who has been at loggerheads with each other for months.

While the leaders from the Oli-led side had assembled at Singhadurbar early on Sunday morning, members of the 'unity-taskforce' from Nepal's circle had reached the venue relatively late.

Before resumption of the meeting, the agreement paper prepared by Oli-faction leaders was sent back by Nepal as he disagreed with the usage of certain terms that, he claimed, would misguide the courts. However, the two sides have agreed to put differences aside, on paper, and move towards reconciliation for now, in what can be termed a breakthrough deal.