With the verdict of the apex court, Nepali Congress leader Sher Bahadur Deuba has started his fifth inning as the prime minister. However, the question now is: will Deuba secure a majority in the House within 30 days? If Deuba fails to secure the required majority, elections will have to be held within six months 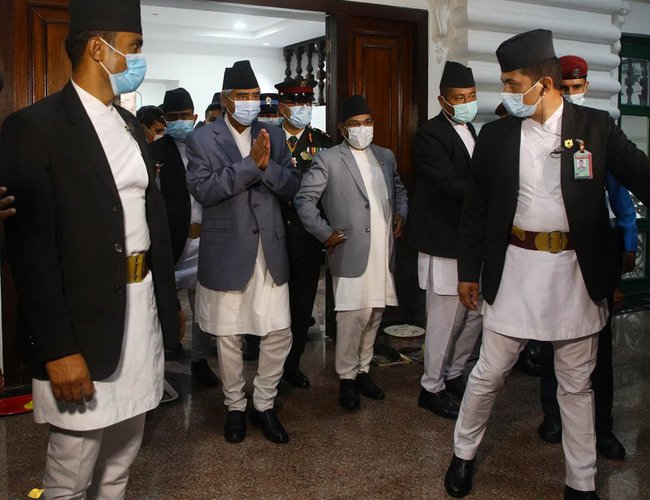 After taking oath from President Bidhya Devi Bhandari on 13 July, NC leader Deuba has started his fifth innings as the prime minister of Nepal.

Following the verdict of the Constitutional Bench of the Supreme Court, Deuba has marched towards Singhdurbar replacing three and half years olf K.P. Sharma Oli-led CPN-UML government.

After the restoration of House in 1996, Nepal had seen five years of horse trading in politics that led four governments to fall within a short period of time.

On July 12, the Supreme Court, in its verdict issued in favor of reinstatement of House of Representatives, had also passed an order to appoint Deuba as the prime minister by 5 pm the following day. This was not the case in the 1996 verdict.

As Deuba has been sworn in as the prime minister, he has to prove his majority within 30 days. In case he fails to secure the majority, the house will be dissolved and there will be a call for fresh elections within six months.

The writ filed by 146-lawmaker strong opposition alliance was among the writ petitions that had moved the apex court demanding the reinstatement of the lower house along with the appointment of Nepali Congress President Deuba as the Prime Minister for staking a claim to the post according to Article 76 (5) of the Constitution.

A five-member constitutional bench led by Chief Justice Cholendra Shumsher Rana issued the ruling on July 12 stating that President Bidya Devi Bhandari's decision to dissolve the House upon the recommendation of Prime Minister KP Sharma Oli was an unconstitutional act.

Reinstating the House of Representatives, the Supreme Court has also issued a writ of mandamus to appoint Nepali Congress (NC) President Deuba as the Prime Minister within two days. The apex Court has also ordered to call the HoR meeting on July 18.

Along with PM Deuba, Maoist Centre leaders have also joined the government. However, Samajbadi Janta Party has said it will join the government only after its party meeting.

As it was expected by many leaders of opposition, the Supreme Court issued an order to reinstate the House terming its dissolution unconstitutional.

However, political pundits did not expect mandamus to appoint Deuba as the Prime Minister in two days. They describe the decision as being of a political nature.

Whatever one thinks about it, the Constitutional Bench of Supreme Court formed to hear writs against the dissolution of House of Representatives has legitimized the opposition claim for Deuba to lead the government.

Although it is a bitter decision of the court with political implications, PM Oli has accepted the verdict with reservations on it.

Although the apex court has been censuring several of Prime Minister Oli’s decisions, few expected that the court could accept all the pleas of Deuba.

By nullifying Citizenship Amendment Ordinance, terming the expansion of cabinet unconstitutional and banning the export of bolts and concretes to India, the Supreme Court had given ample suggestions to show where it was heading.

Quietly accepting the court verdict, PM K.P. Sharma Oli has tried to avoid controversy now. However, this decision is likely to push PM Oli to extreme front in the coming days. This will also force politicians to appoint more henchmen in the court for politicization of judiciary.

Following the verdict, Sher Bahadur Tamang, secretary of CPN-UML party office, informed that his party has reservation over the verdict although it had accepted it.

Similarly, leader Subash Chandra Nembang said that they will respect the verdict of the court. "Although the SC's verdict was unexpected, the party would respect the judiciary and welcome the verdict," said leader Sher BahadurTamang.

Cadre In the Street

However, Prime Minister Oli’s cadres have expressed that their party will take a certain legal and political course. In the revived house, Oli’s supporters can take any decision to criticize the justice.

Although the leaders have not spoken anything about it, the cadres are demanding registering an impeachment motion against selected judges. If this idea is moved forward, it will likely invite major constitutional upheavals.

Since 2006, Nepal’s court has seen several upheavals. Three years ago, chief justice Gopal Prasad Parajuli was removed unceremoniously by a letter of secretary of Judicial Council. Similarly, acting chief justice Dipak Raj Joshi was removed following a hearing committee vote against him. Joshi even denied the bench to take part as a senior judge.

If the fresh reaction of cadres of the National Youth Force who gathered in Maitighar Mandala, chanting slogans against the recently passed verdict that goes against Oli's continuity in power, is an indication, the Supreme Court and judges will have to face a new political ire.

"We will not accept all the orders passed by the Supreme Court, beware!" the demonstrators chanted. Oli’s confidant and the youth wing leader Mahesh Basnet was present at the protests, too.

Basnet claimed that the court's decision was unfair as it is not the judiciary but the president’s prerogative to appoint the Prime Minister, and as such the order is unacceptable. The Supreme Court's decision has received mixed reviews from all sections of the society.

This is the second time that the Apex Court has decided in favor of reinstatement of House during PM Oli's tenure.

As the Supreme Court passed a verdict, overturning the decisions, there is a mixed reaction. Petitioners hailed the verdict as historic. However, defenders termed the decision as a blunder.

“With its verdict, the Supreme Court has single-handedly saved constitution and revived rule of law. It has reinstated people's faith in independent judiciary. We, the opposition alliance, are holding a meeting later and will issue an extended statement then,” said Sher Bahadur Deuba, President, Nepali Congress.

“The Supreme Court's decision is an important historical event in itself. This is a victory not only of the opposition alliance, but of the country and the people. Supreme Court, by means of this verdict, has taken the nation and constitution's prestige to a new high,” said Pushpa Kamal Dahal, Chair, CPN (Maoist Centre). 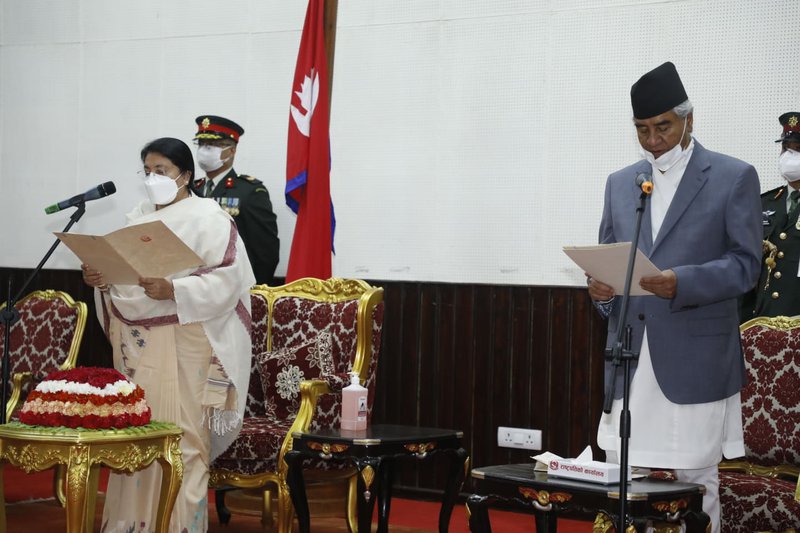 “This verdict has fulfilled four important tasks- it has clarified several confusing elements of the Constitution; it has limited possible authoritarian intentions of Prime Minister(s) and said that all state bodies should remain within their limits; revived Constitution and parliament; and, has safeguarded the Constitution and Parliament, yet again, which has enhanced the roles and prestige of the Court,” said Madhav Kumar Nepal, Senior Leader, CPN-UML.

Rebel MPs Yogesh Bhattarai and Ram Kumari Jhankri also toed with Nepal. “I respect and welcome the Constitutional Bench's order to reinstate the House of Representatives. I further urge all leaders and cadres of the UML to maintain peace and have patience in a bid to save the party's unity,” said Bhattarai.

“The judiciary has added stars to its prestige with the decision. I thank the judiciary, members of the constitutional bench, advocates, political leadership, media and civil society that raised their voice against the unconstitutional step,” said Jhankri.

However, Oli supporters interpreted the verdict differently. “The Supreme Court's decision has raised a huge question in terms of justice imparted, on a global scale. Despite that, we will accept the court's verdict,” said Subas Nembang, former chair of Constituent Assembly, CPN-UML

“People should understand that today's decision has ignited another episode of political instability in the country. Those that are party to this action will have to stand in court of history and face trial,” said Ishwar Pokhrel, CPN-UML leader.

“The court's decision has steered Nepal's democratic system towards the wrong direction. It has further negatively affected the balance between the three pillars of the theory of separation of power - legislative, executive and the judiciary. Supreme Court has breached its lines and entered the President's area of jurisdiction on appointing Prime Ministers, further severely affecting the multi-party system,” said Pradeep Kumar Gyawali, Spokesperson, CPN-UML.

“I am borrowing the lines of senior political leader, late Rajeshwar Devkota -- an ox has delivered a calf in the Supreme Court. The Supreme Court's political decision to reinstate the House will face complications during implementation, due to which the danger of the country getting stuck in instability has risen further,” said Kamal Thapa, Chair, Rastriya Prajatantra Party.

Despite being removed from power, CPN-UML leader K.P. Sharma Oli is still in a politically powerful position to navigate the course of politics.

Although he takes oath of office and enters Singh Durbar, Prime Minister Deuba will find it tough to save his government because it will still be dependent on the mercy of CPN-UML leader Oli.