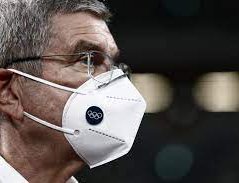 Koike and Bach met at the Tokyo Metropolitan Government Building on Thursday afternoon.

Bach said the Games will be "the most restrictive sports event ever in the world." He added that the Olympic community wants to avoid any kind of risk for people of Tokyo and elsewhere in Japan.

He stressed that the strict rules in the Tokyo 2020 playbooks to prevent infections are working and being enforced.

He said all athletes and other members of delegations are tested upon arrival in Japan.

Bach added that those found positive have been immediately isolated and their close contacts are under relevant quarantine protocols, so "the risk for the other residents of the Olympic village and risk for the Japanese people is zero."

Koike said that with eight days to go before the Olympics, Tokyo is "fighting various numbers" in taking measures against the coronavirus.

She pledged to ensure that thorough, effective anti-virus measures are taken to protect the health and lives of those who travel all the way to Tokyo from abroad, as well as people of Tokyo and Japan.

Koike also said Tokyo will set up an environment where athletes can perform at their best.

She said she believes in the power of sports, and that the Tokyo Games will be exciting for people all over the world.