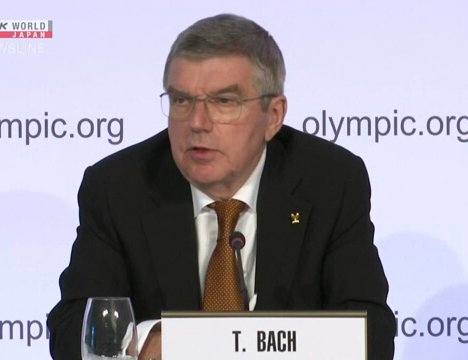 International Olympic Committee President Thomas Bach has called on the Japanese people to welcome athletes who are participating in the Tokyo Games despite the pandemic.

In an IOC Executive Board meeting in Tokyo on Saturday, the organizing committee explained the rationale for banning spectators at most of the venues. It also reported on measures taken at airports as well as the coronavirus infection status in Japan.

In a news conference, Bach said 15 out of the approximately 15,000 athletes and others who arrived in Japan for the Games between July 1 and Friday tested positive for the coronavirus.

He said this is a very low rate of 0.1 percent, and that "all the concerned people were immediately isolated," so that they do not pose any risk to other participants or the Japanese population.

Referring to the fact that many Japanese people are against holding the Games, Bach said "We have to understand people have to face uncertainty, and there you react with some skepticism."

He said "What we can do only is to try to get the attention of these people and try to enter into a dialogue in order to get not only the emotions across but also try to gain their confidence in these strict COVID measures."

Bach added "We are also confident that once the Japanese people will see the athletes performing in these Olympic Games and hopefully even successfully," then the attitude may become less emotional or less aggressive.

He said, like the Japanese people, the athletes have overcome so many obstacles to reach this point, and called on the people not only to welcome the athletes but support them.

CAN Lifts Suspension Of Leg-spinner Lamichhane By NEW SPOTLIGHT ONLINE 1 day, 20 hours ago