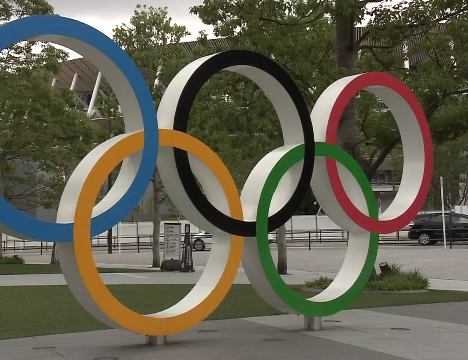 Zhang Yufei got off to a strong start. Her teammates fought hard to hold it.
Their winning time of 7 minutes, 40.33 seconds was more than a second faster than the previous world record set by Australia in 2019.

The US claimed silver, with Australia taking bronze.
All three teams on the podium finished under the old record.
The win capped a stunning day for Zhang who had taken gold an hour earlier in the women's 200-meter butterfly with an Olympic record time.

Andrade's silver is the first-ever medal for a Brazilian female gymnast. Angelina Melnikova took bronze for the Russian Olympic Committee.

In both men's and women's events in Judo, two more golds were won by Japan on Thursday. That's six straight days with a local athlete taking to the podium.

In the men's 100-kilo category, Wolf Aaron defeated South Korea's Cho Gu-ham on a golden score ippon thanks to his sharp O-uchi-gari.
Wolf overcame surgery on both knees to win Japan's first gold in this weight category since the Sydney Games in 2000.

Another gold went to Hamada Shori who beat France's Madeleine Malonga in the women's 78-kilogram category. Hamada won by ippon, blowing past her opponent in just 69 seconds of action.

Japan's female badminton doubles pair has tumbled out at the quarterfinal stage.

Fukushima Yuki and Hirota Sayaka, the world number-one doubles team, lost to competitors from China on Thursday, leaving Japan's dreams of garnering a gold medal in the sport unfulfilled.

On Sunday, Hirota revealed that she tore a knee ligament in June, an injury that will take at least 6 months to recover from. She wore a knee brace during Thursday's match, in which she and Fukushima won only the first of three games.

Fukushima later praised her partner, saying that she did her best despite her injury. Hirota said she was proud to have taken part in the Tokyo Games.

The superstars of track and field are finally pulling on their spikes one week on from the opening ceremony.

First up was the preliminary round of the women's 100-meter sprint at 9 a.m. local time.

That was followed by the men's high jump qualifiers and the first round of the women's 800-meter run.

Later on Friday, the first track gold medal will be handed to the winner of the men's 10,000-meter race.