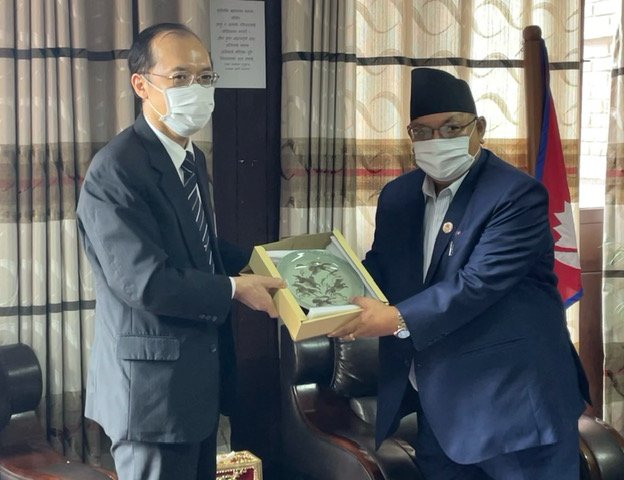 On this occasion, Ambassador Kikuta congratulated Minister Shrestha for his appointment and they discussed, inter alia, the recent donation by the Government of Japan about 1.6 million doses of Japanese-made COVID-19 AstraZeneca vaccine for Nepal through COVAX facility, expected to arrive soon.

Ambassador Kikuta expressed his hope for the smooth implementation of vaccination campaign and Minister Shrestha took it with thanks and committed to do so. The Embassy of Japan is now coordinating with the Ministry of Health and Population of Nepal to this effect.

Ambassador Kikuta informed the Minister of Japan’s multiple approaches to fight against COVID-19, mentioning, among others, that Japan took a leading role to establish the COVAX facility and pledged 1,000 million USD in total, and that Japan has been supporting Nepali hospitals under this difficult situation by the medical equipment assistance and made-in Japan ambulances will come in autumn.

Moreover, Ambassador pointed out that Japan has contributed to UNICEF for the cold-chain facility to ensure that the vaccine would reach down as “Last One Mile Support,” which will be beneficial for all Nepali people. Ambassador Kikuta shared the view with Minister Shrestha that Japan and Nepal will strengthen the great partnership by their people, as shown in the long history of friendship between our two countries.

Nepal Has Huge Potential As A Producer Of Green Energy: British Ambassador Pollitt By NEW SPOTLIGHT ONLINE 7 hours, 34 minutes ago