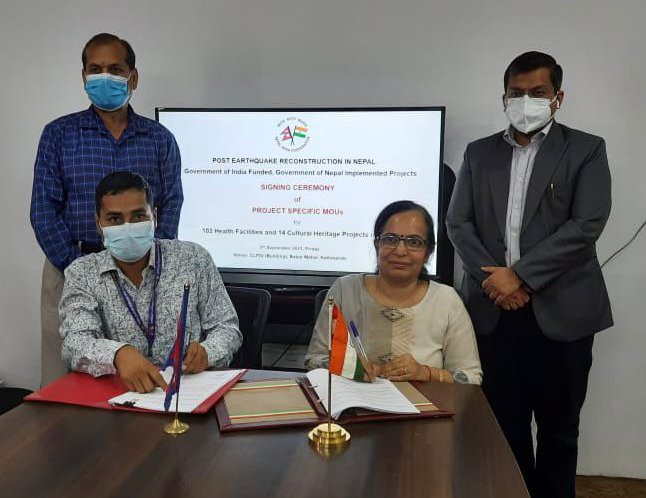 According to the Embassy of India, 103 health sector projects (in Lalitpur, Rasuwa, Nuwakot, Sindhupalchowk, Ramechhap, Dolakha, Gulmi, Gorkha and Kavre districts) spread across various districts in Nepal will also be constructed.

The MoUs were signed by both sides in the presence of Karun Bansal, First Secretary (Development Partnership & Reconstruction) and Shyam Kishore Singh, Project Director, CLPIU..

According to MoU, Government of India will provide NRs 420 crores to CLPIU, (Building) of NRA which is the implementing agency for both health and cultural heritage sector projects.

The event was attended by officials of the Embassy of India, Central Level Project Implementation Unit (Building) and representatives from Government of India’s project consultants INTACH and CBRI.

According to a press release issued by the Embassy of India Kathmandu, under post-earthquake reconstruction package, Government of India (GoI) has allocated total grant of USD 250 million, including US $50 million each for education, cultural heritage and health sector.

Similarly, India has allocated USD 100 million for the Housing sector. In total, 71 education sector projects, 28 cultural heritage sector projects in 7 districts, 147 health facilities in 10 districts and construction of 50,000 houses in Gorkha and Nuwakot is being undertaken with GoI grant assistance.