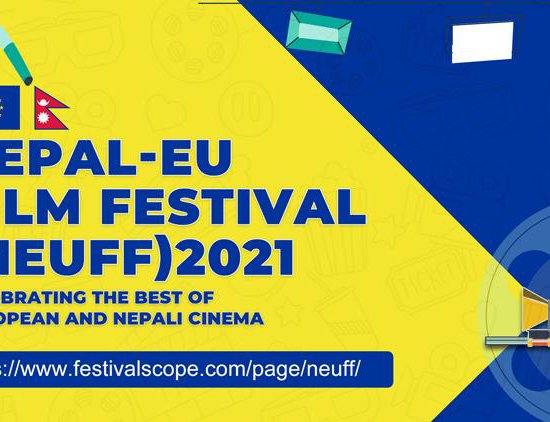 Nepal and European is so close and far. Although Nepal and Europe has over five century old recorded history of connecting each other, Nepalese have a little understanding of the diversity of European culture, language and lifestyle.

Organized by the Delegation of the European Union to Nepal annually, Nepal-EU Film festival is very popular cultural programs in Nepal. Despite the COVID-19 pandemic, European Film festival is widely popular among Nepalese youth.

The Delegation of the European Union to Nepal presents the Nepal European Union Virtual Film Festival 2021 (NEUFF 2021) on the virtual streaming platform Festival Scope. Now into its 10th edition, the NEUFF brings 15 award-winning titles plus 24 other films from 14 European countries to the Nepalese audience from 17 September to 25 September.

“Despite the hardships that have come with the pandemic leading cultural activities to come to a standstill, we keep promoting cultural exchanges and fusion between Nepal and the European Union through the online screening of some of the best European and Nepali films,” said Stephane Maicon, Charge d’ Affairs at the Delegation of the European Union to Nepal.

The festival proposes 11 European award winning titles, two of which will be subtitled into Nepali, and three award winning long Nepali feature :‘Bulbul’ directed by Binod Poudel, ‘Aama Khando’ directed by Dhondup Tsering and ‘Sarita’ directed by Sergio Basso. Similarly, the environmental film from India, ‘I Cannot Give You My Forest’ directed by Nandan Saxena and Kavita Bahl received the National Film Award for best agriculture film.

One other European film ‘Her Job’ also has Nepali subtitles. The film revolves around the story of an oppressed woman who discovers a new sense of self when she gets her first job as a cleaner in a shopping mall.

Her Job is Labôt’s debut feature film which world premiered in the Discovery section of the 43rd Toronto International Film Festival.

Other movies will propose English subtitles.

In addition to this main selection, the highlight of this year’s festival is that there are 23 films on wildlife conservation, environment and climate change. All of them seek to raise awareness on the importance of the environment around us, the challenges that climate change poses to our flora and fauna and above all the need to find more amicable and sustainable methods to live in harmony with nature.

The short documentary ‘Firefox Guardian’ tells a story about how a local woman conservationist in east Nepal has set out to raise awareness on the need to step up efforts to save the ‘Red Panda’ listed as an endangered species.

The settings of the other environmental films are in different places in Europe and India. They are in the list as the issues they talk about are very much relevant in Nepal.

Besides the main festival, three side events on different aspects of film-making are being organised. The first side event to be organised on 19 September at 2:00 pm local time is a discussion on the ‘Artistic and Financial Side of European and Nepali Film Production. Renowned film directors from Europe and Nepal will participate in the discussion.

The second side event is an interaction on the topic ‘Women in Films’ being organised on 22nd Sept at 2:00 pm local time. Well-known film directors and festival organisers from Europe and Nepal will discuss on the different aspects of filmmaking and the present state of involvement of women in the industry.

Likewise, the third side event is a discussion on ‘Green Film Making’ to be facilitated by the Dr. Alberto Battocchi, who will speak about environmental sustainability in audio visual productions. This side event will take place on 24 Sept. and will start at 2:00 pm.

This year’s edition of the festival has one more activity, which seeks to recognize the talents of professional filmmakers through a short film competition on the topic ‘Gender Equality. A total of 15 films have been received for this competition.

The submission of films concluded on the 31st of August and currently the evaluation process is in progress. The winner of the competition will receive a cash prize of Euro 500. The person will be invited to share experiences on the closing day of the festival and the winning film will be part of the main festival.

The full details of the films can be accessed at: https://bit.ly/3h29c5h(link is external)

The festival is free of charge, and a virtual ticket that is provided by the website allows every spectator to access all the movies. To watch the films, audiences need to go to the site of Festival Scope using this link: https://www.festivalscope.com/page/neuff/(link is external) After entering the site which will be active from 17 Sept, a new audience needs to create an account using his/her email address. After creating the account, the audience can sign in to the site and watch any or all films.

Like in the past, different films displayed during the festival will help to enhance the understanding of Nepalese on diversity of European culture, society and geography.