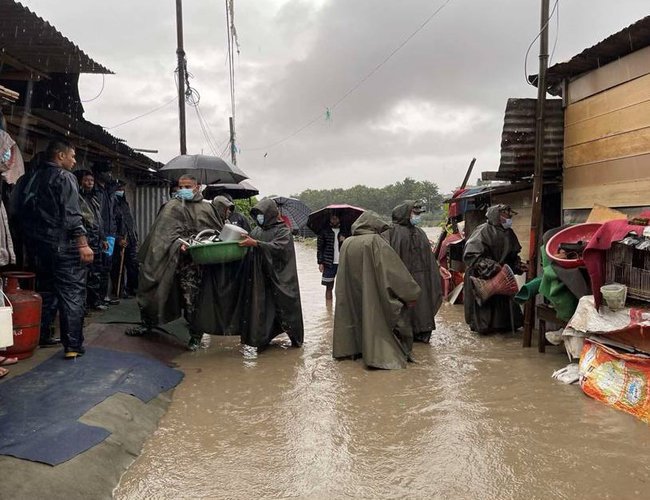 “It seems monsoon has completed the phase of slow rain and entered into warmer sun and high intensity rain. The last night’s rainfall has indicated this,” tweets Namindra Dahal, PhD showing the rain pattern of a recent day in different locations.

Dahal’s message is clear. With the rising temperature globally, extreme weather is likely to be normal and high intensity rains such as in Kathmandu are now a global phenomenon. From Europe to New York, Nepal and India, intense rains had already created havoc killing people and destroying the property.

Although these kinds of rain and flood used to occur in the valley during the end of monsoon season in the past, the recent rain falls concentrated around some pockets and floods in the river banks is unusual.

As incessant rainfall inundated settlements in Kathmandu valley, Nepal Army mobilized its rescue team to save the property and life of the people in flood affected areas.

Due to heavy rains overnight, various places in the Valley were inundated.

Rivers including Bagmati, Bishnumati, and Dhobikhola in Kathmandu got swollen as the rainfall did not stop for a while. According to Nepal Army, settlements around Dhobikhola, Sundarighat, and Bagmati River had been inundated.

Heavy and record breaking downpour in the Kathmandu Valley since that Sunday midnight affected normal life as over 800 houses close to rivers got inundated.
Although no human casualty was reported, many houses and a lot of property have been damaged, according to Nepal Police Headquarters. 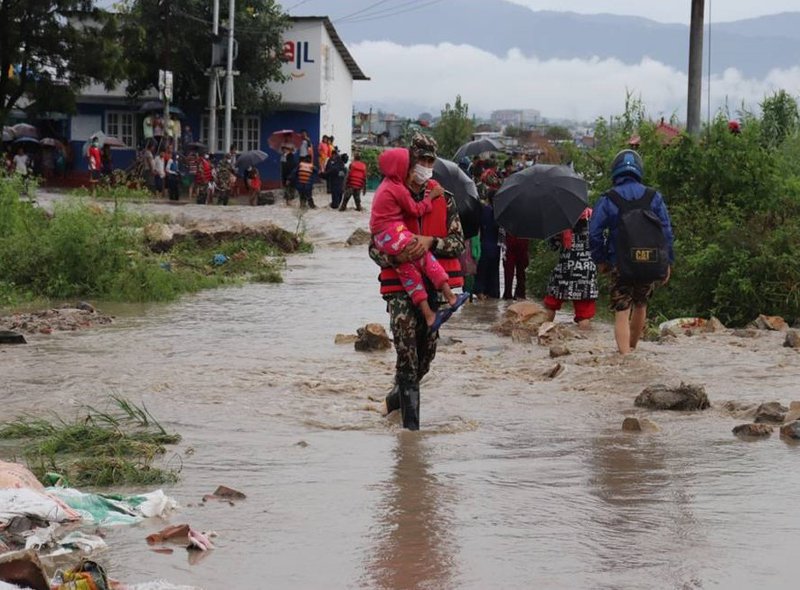 The rain inundated the settlements along the banks of the Bagmati, Bishnumati, Hanumante, Manohara, Dhobikhola, Balkhu-Tukucha rivers. The police said flood entered in around 882 houses in Kathmandu, Bhaktapur and Lalitpur districts.


According to Kathmandu Police Chief and Senior Superintendent of Police (SSP) Ashok Singh, 382 houses were inundated in Kathmandu and 138 people were rescued.

In Bhaktapur, 500 houses of landless squatters were inundated along the Manohara river side of Madhyapur Thimi Municipality-1. Over 150 people affected by the flood have been rescued, according to NDRRMA.

Continuous rains have also affected Kalimati Fruit and Vegetable Market after Bishnumati River entered the area at around 4:30 am on Monday, SSP Singh said. Details of the losses of vegetables and property damaged there area are yet to come.


According to Raj Kumar Rai, a shop owner at Kalimati Market, said that property worth Rs. 20 million was damaged when 250 stalls of the market submerged.
Similarly, flood in Balkhu-Tukucha river also affected life of people residing along the river side, said police.

Although no human casualty was reported in Kathmandu Valley, landslides and floods triggered by continuous rains took six lives and injured four in different parts of the country on Monday.


The recent rainfall has shown that along with Kathmandu Valley, mountains and mountainous areas are at great risk of landslides. At a time when landslides and subsequent floods are wreaking havoc on many hilly and mountainous areas, flooding in the Tarai trying to divert large rivers has become another challenge.

This time too, Saptakoshi has cut about one and a half kilometer area in Belka Municipality-8 of Udayapur on the border of Chataraghat of Sunsari. 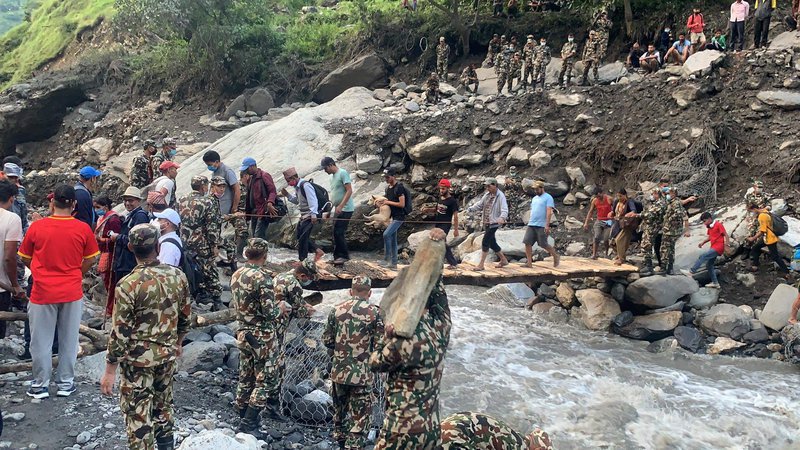 In the Saptari area, four excavators and three excavators were used to open and divert the river. At the same time, security personnel and locals controlled the river by filling thousands of bags with sand.

“It was becoming difficult to bear the impact of climate change. Climate had changed due to greenhouse gas emissions from the activities of industrialized countries. It has had a negative impact on countries like Nepal,” said Minister for Energy, Water Resources and Irrigation Pampha Bhusal.

Similarly, Secretary for Water Resources and Irrigation Sagar Kumar Rai said that the message of eco-friendliness and civilization should be spread by planting trees in open space.

“With increasing climate change, cities face many “unknowns”, and therefore investment is needed for disaster preparedness and recovery. Early warning systems for cyclones established in India have provided enough lead time for evacuation and saved lives. Flood warning mechanisms in Nepal that combine community participation with high level science and use of ICT have also saved lives. Such mechanisms need to be upgraded, replicated and scaled.”

“In the past few weeks (of 2021), many cities across the world in Germany, Belgium, China, India and Middle east faced floods triggered by unprecedented rainfall. In China, for example, one year’s worth of rain came in one day, which expert argue is caused by climate change. Flood risks have amplified many times,” writes Ajay Dixit in South Asian Nadi Sambad.

“Globally city policies seem driven more by economic considerations and asset values rather than by holistic measures of livability and lower disaster risks. Urban planners, architects, engineers, designers, and policy-makers need to engage city dwellers in designing livable, green, and inclusive and people friendly cities with low disaster risks including that from floods.”

“The basic premise for policy and project design should be that all evacuation routes, for people as well as for the safe discharge of floodwaters, must remain uninterrupted. Minimizing increasing risks of climate change requires significant changes in the way urban areas are developed and governed.”

Given the current rainfall, it seems that extreme weather is going to create more havoc in the life of the people living in different parts of the world. It will likely have more effect on low land areas.