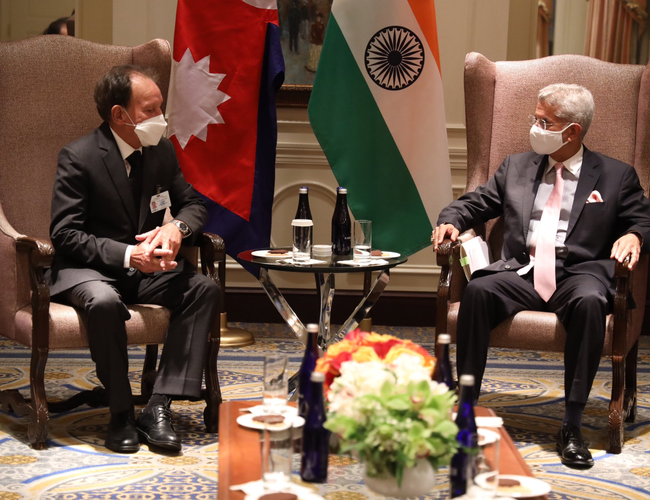 Minister for Foreign Affairs Hon. Dr. Narayan Khadka had a bilateral meeting with Dr. S. Jaishankar, External Affairs Minister of India, on the sidelines of the 76th session of the United Nations General Assembly this morning. The two ministers agreed to further strengthen the existing cooperation between Nepal and India.

During the meeting, the two ministers discussed various matters of bilateral and multilateral affairs and exchanged views on further promoting cooperation between the two countries.

The Foreign Minister Dr. Khadka also thanked the Government of India for continued cooperation in the socio-economic development of Nepal.

According to a press release issued by Permanent Mission of Nepal to the United Nations New York, the two sides also discussed the challenges posed by the COVID-19 on the lives and livelihoods of peoples of both the countries and agreed to work together in fighting the virus.

Minister also attended the interaction program with Nepali diaspora co-organized by the office of the Consulate General, Non-Resident Nepali Association and Nepali community organizations later in the afternoon. He underscored the role of NRNs in Nepal's socio-economic development largely in the sectors of investment, culture and tourism promotion, and urged them to contribute to Nepal’s development efforts.

The Foreign Minister will address the General Debate of the 76th session of the United Nations General Assembly in the afternoon tomorrow.

US Under Secretary Nuland Arrived In Kathmandu By NEW SPOTLIGHT ONLINE 4 hours, 36 minutes ago

Nepal Has Huge Potential As A Producer Of Green Energy: British Ambassador Pollitt By NEW SPOTLIGHT ONLINE 16 hours, 33 minutes ago