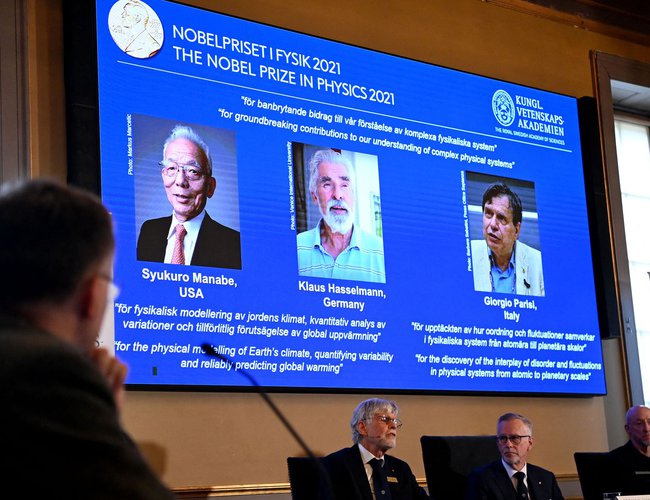 The winners of this year's Nobel Prize in Physics include a Japan-born scientist.

The Royal Swedish Academy of Sciences recognized three laureates whose scientific breakthroughs laid the foundation for a better understanding of climate, and how humanity influences it.

The academy announced that one half of the prize jointly goes to Syukuro Manabe and Klaus Hasselmann for the physical modelling of Earth's climate, quantifying variability and reliably predicting global warming.

It also said that the other half goes to Giorgio Parisi for the discovery of the interplay of disorder and fluctuations in physical systems from atomic to planetary scales.

Syukuro Manabe and Klaus Hasselmann both studied the Earth's changing climate. It's the first time the Nobel in Physics has recognized work in this area.

Manabe completed his doctorate at the University of Tokyo, before moving to the United States.

He worked at the National Oceanic and Atmospheric Administration. In the 1960s, he succeeded in demonstrating how carbon dioxide in the atmosphere contributes to global warming.

Hasselmann built on that work. His modeling showed the link between weather and climate, and he also developed methods to identify the imprint of human activities in the climate. This allowed scientists to prove that human-created emissions can increase temperatures.

Together, their discoveries allowed for more reliable predictions of global warming.

Another scientist, Giorgio Parisi, had a more abstract impact on physics.

At the announcement, Parisi said climate change must be tackled at a faster pace and urged immediate action.

Ukraine welcomes US Offer Of Long-Range Rockets By Agencies 12 hours, 30 minutes ago

US Shoots Down China's Balloon, Says Defense Department By Agencies 12 hours, 45 minutes ago

Russians Advance On Bakhmut As Allies Mull Jets For Ukraine By Agencies 4 days, 13 hours ago