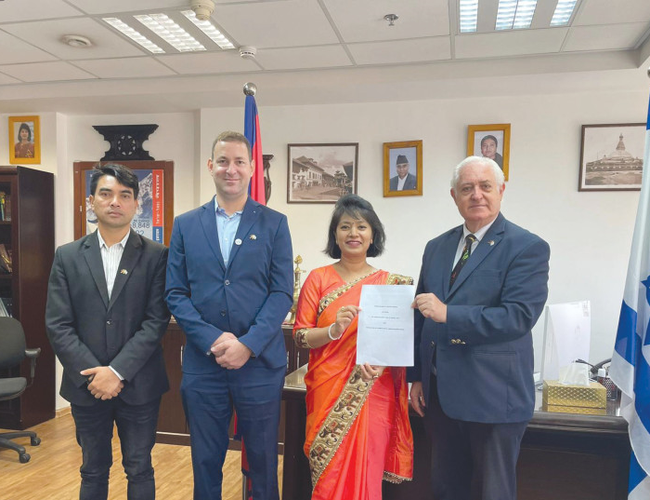 DIPLOMATIC RELATIONS between Israel and Nepal were established in June 1960. Israel opened an embassy in Kathmandu in March 1961, and a Nepalese Consulate-General was opened in Israel in November 1993. Before that, there was an honorary consul-general, and Nepalese diplomats accredited to Israel were stationed in Cairo. It was not until March 2008 that there was a resident ambassador of Nepal in Israel. JP

Anjan Shakya, her country’s fourth resident ambassador in Israel, and the first woman to hold the post, is completing her mission on October 22 and returning home. A political appointee, she quickly learned to be an effective diplomat, showing up to almost every event to which she was invited and constantly exploring ways to enhance bilateral ties.

Always attired in one of her many colorful saris, she drew attention to herself through pride in her heritage. While some African and Asian diplomats wear their national costume on special occasions but otherwise dress in Western clothes, Shakya was always in a sari, and when group photographs were taken at diplomatic gatherings, she was always in front.

Over the past couple of weeks, she has been making her farewells, including at BDO Israel, where she delivered a gift for Anat Bernstein-Reich, chairwoman of the Israel-India & Nepal Chamber of Commerce, who is CEO of BDO’s Israel-investment division.

Due to her close connections with the Ambassadors’ Club of Israel, Shakya hosted a small ceremony at the Embassy of Nepal whereby a memorandum of understanding was signed by her and by Ambassador to Nepal Hanan Goder, who participated via Zoom from Kathmandu. The MoU, between the Association of Former Nepalese Ambassadors to Israel and the ACI, covers business, tourism and culture. Participating in the ceremony in Tel Aviv were ACI’s president and CEO, Yitzhak Eldan and Itsik Kamilian, respectively, and Nepalese chargé d’affaires Arjun Ghimire.