Maa Siddhidatri gives 18 types of siddhis to her saadhakas. 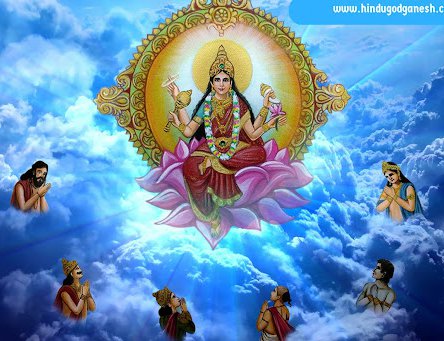 Goddess Siddhidatri, the ninth form of Goddess Durga, is worshiped on the ninth day or the Mahanavami. This Goddess can be seen surrounded and worshiped by men, demons, Gods and yakshas (celestial beings). She is the giver of all siddhis (perfection) and ready to bestow happiness on her followers.

It is believed that one side of Lord Shiva’s body is that of Goddess Siddhidatri. Therefore, he is also known by the name of Ardhanarishwar. According to Vedic scriptures, Lord Shiva attained all the siddhis by worshiping this Goddess.

Form and Appearance of Goddess Siddhidatri

This four-armed avatar of Devi Siddhidatri clad in a red saree is seen sitting on a lotus flower. She is also seen mounted on a lion. She is depicted holding a Gada (mace) in her upper right hand, a chakra in her lower right hand, a lotus flower in her lower left hand and a conch-shell in her upper left hand. It is said that one can even see a disc of light around her golden crown. This light is believed to instill devotion in the heart of devotees towards the Supreme Power and liberation from karmic bindings. Goddess Siddhidatri bestows occult powers on her worshipers and is therefore revered by beings from all three realms i.e. heaven, hell and earth.

On the ninth day of Navratri, devotees bathe themselves early morning and worship the ‘Navratri Kalash’. All the chapters of ‘Durga Saptashi’ are recited and Mahanavami fast is observed. The devotees please the Goddess by performing puja, hawan and chanting Siddhidatri Pujanmantras. Devotees offer her nine oranges, burn incense, light earthen lamp, offer fragrant flowers, fruits, gems and clothing as a part of the puja ritual.

Meaning: “The ways in which all the gods, goddess and divine souls worship you, in the same manner we worship you. Kindly grant your blessings on us.”

Some devotees perform Kanya pujan on this day instead of Ashtami (eighth day). Devotees invite nine young girls to their house and worship them. These girls represent the Navdurga or the nine avatars of Goddess Durga. Devotees ensure that these colorfully dressed girls are seated on pedestals and offer them black chana, puris and halwa. As a part of the ritual, they also present them with money and clothes. They apply tikas and touch their feet to seek their blessings before bidding farewell to them.

Durga Puja- The most celebrated annual festival in West Bengal

In the state of West Bengal, devotees worship and immerse beautifully decorated idols of Goddess Durga in rivers and sea. This ritual is basically known as Durga Visarjan. Processions of devotees carrying idols of Maa Durga on their heads bid farewell to this deity on this day. They believe that this Goddess will certainly vanquish all their troubles.

Mahanavami is Followed by Dashami

Mahanavami or ninth day of Navratri precedes Vijaya Dashami. The tenth day or Dashmi, popularly known as Vijaydashmi symbolizes the victory of good over evil. People celebrate this festival by burning down the effigies of Ravana along with his brothers Kumbhkaran and Meghnad.

Maa Siddhidatri gives 18 types of siddhis to her saadhakas.

Lord Shiva, also known as Ardhnareshwar, is believed to have attained all siddhis by worshiping Goddess Siddhidatri.

Maa Siddhidatri has its shrine on the Mount Nanda in Himalayas, which is also a famous pilgrimage centre.

Goddess Siddhidatri governs and also provides direction to the planet Ketu which is known as Dragon Tail in English.