Taleju Bhavani And Significant To Visit On Mahanavami

Taleju Bhavani And Significant To Visit On Mahanavami 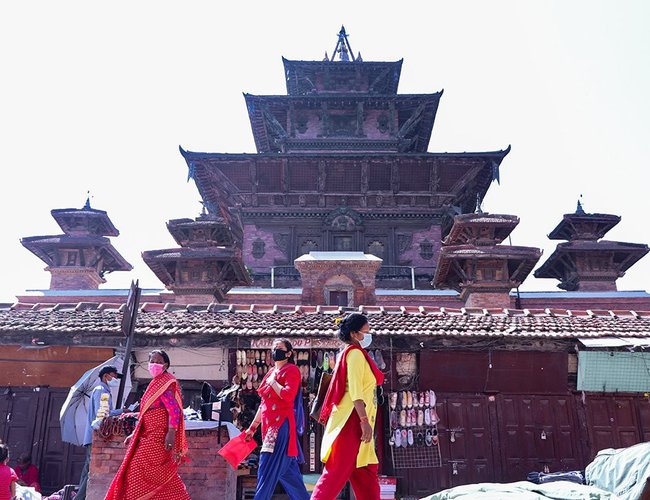 Large numbers of devotees visited the Taleju Bhawani Temple located at the Kathmandu Durbar Square Premises on the occasion of Maha Navami.

The Taleju Bhawani Temple opens for the public only once a year on the day of Maha Navami during Dashain. However, owing to the COVID-19 pandemic, the temple was closed last year.

Goddess Taleju Bhawani is the patron deity of Newari Hindus in the Kathmandu valley. The goddess was brought to the Kathmandu Valley in the 14th century by King Harisiṃha Deva, a Karṇāṭa king of Tirhut, who was driven out of his kingdom in 1325 by Muslim armies. Harisiṃha installed Goddess Taleju, who became the house-goddess of the Malla royal family, as evidenced by two Sanskrit texts, Talejvāgama and Tulyāgama, which are the property of the Rājopādhyāyas of Bhaktapur and Patan. She remained the tutelary deity for the Malla Kings in all three kingdoms of Kathmandu, Patan and Bhaktapur and her temple is the most important in each city. Of the three temples dedicated to Taleju Bhawani in Nepal, the oldest one is in Bhaktapur — in fact, they are built at the same height so she has no problems flying from one to the next!

The Golden Gateway (Sun Dhoka) is covered with gilt-copper sculptures and was erected by Ranjit Malla in 1753–54, dedicated to the goddess Taleju. At the center of the metal gate or tōraṇa is an eight-headed and three-armed form of Taleju, above her, is a heavy frame containing Garuḍa, Nāgas and floral motifs. Running down either side of the door are figures of deities including an emaciated Goddess Kāli, and in the top corners of the inner frame are two makaras. On either side of the Golden Gate are large copperplate inscriptions.

The three current temples in the valley dedicated to Goddess Taleju were built in the 1500s by the Malla kings, who are said to be the descendants of Nanyadeva, the founder of the ‘Karṇāṭaki’ dynasty of Mithila and Nepal. In 1096 CE, King Nanyadeva expelled the Sena armies of Bengal from North Bihar and established the Karṇāṭa dynasty, with Simraungadh (in present-day South Nepal) as its capital. His descendants ruled for over two centuries until 1326 CE, when the armies of Ghyasuddin Tughlak conquered and sacked Simraungadh, forcing the then ruler, King Harisiṃha (Harisingh) Deva to flee to the Nepal hills. King Harisiṃha took with him the original yantra of the Goddess Bhavani and installed it in Bhaktapur in Nepal. The Newar community soon adopted the worship of Goddess Taleju Bhawani.

These Nepali kings originally hailed from the konkaṇ region, on the banks of River Chandrabhaga that flows through the Solapur district of Maharashtra — hinting at an ancient connection between the Tuljha Bhavani temple in Maharashtra and the Taleju temple in Bhaktapur. In the Mharashtra region, the Tuljapur Temple gained great prominence during the reign of Maratha ruler Chhatrapati Shivaji, whose family deity was Tulja Bhawani — a temple that was sadly destroyed by Islamic invaders and rebuilt many a time.

In the 14th century, a Malla dynasty ruler Jayasthiti Malla married the granddaughter of the last Karṇāṭaki ruler Harisiṃha Deva, thereby connecting his lineage with that of the more illustrious Karṇāṭaki kings. The Malla kings also began worshipping the Goddess Taleju Bhawani as their patron goddess, a tradition continued by them until the Gorkhas overthrew the dynasty in the 18th century. However, so strong was the devotion to the goddess in the valley, that the Gorkha king Prithvi Bikram Shah, continued the state patronage of the goddess.

In Bhaktapur’s Durbar Square her Golden Gate stands supreme in guarding the entrance to the main palace, exquisitely carved in a mix of copper and gold with the pagoda roof, finials, rampant lines, makaras and elephants. In Patan, two temples are dedicated to her: one rises above the three palaces to command the highest level in the city, while the main shrine is accessed through the courtyard of Mul Chowk. 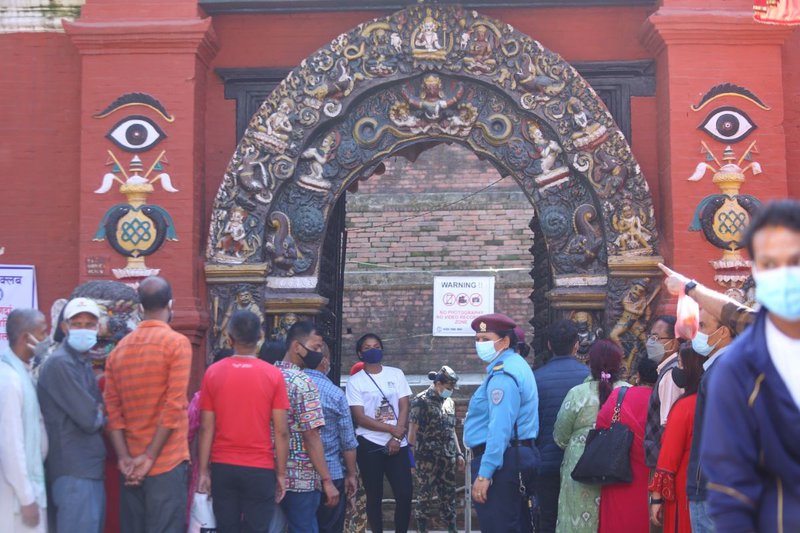 A song, called a dapha, frequently performed in Bhaktapur, Ganamani, in mixed Newari and Sanskrit, dedicated to the Goddess Taleju.

This one is performed in the Rāga Āsāvari and a translation of the lyrics is as follows.

O Mother with big eyes, [you are] the jewel of [the] retinues, esoteric, impossible [and] deep [to understand]. Sages, the gods of [different] directions [and] Śiva do not devote to others [but only to you].

Meditate on [her], repeat [her] name, do penance, keep attention [and] feeling [on her], [offer] wealth [and] sacrifice oblation; [to] the compassionate mother, O Mother.

[I] bow down [to you,] the pure[,] queen [and] mistress of the lord of the world, with graceful face, O [mother] goddess; Sitting on the head of the evil god[s] [and] all ghosts (bhūta) including Śiva.

[You, decorated with] braided hair, a lion [as a vehicle], snakes, sitting on a bull [and] holding all kinds of arms, O [goddess]. No other place to get salvation for Śrī Ranajita, O [mother, you, who is] pervasive over [all] fourteen [directions].