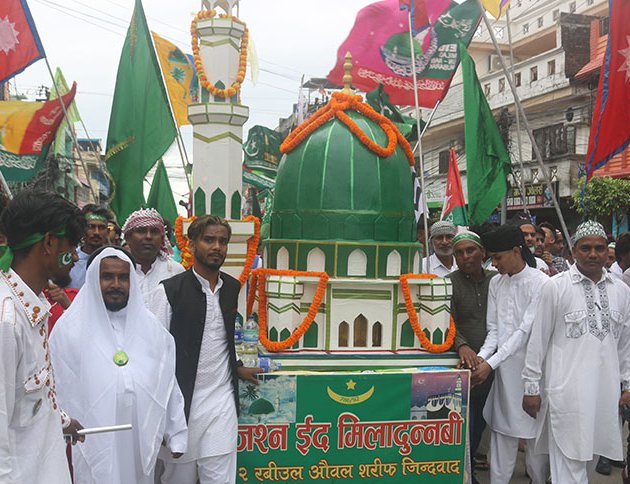 The birthday of the Prophet Muhammad is observed with a public holiday in Nepal. Also known as Maulid Nabi, the date of this holiday is based in the Islamic lunar calendar. Maulid Nabi falls on the 12th day of the third Islamic month of Rabi’ al-awwal.

Various Nepali Muslim organizations in Nepal organized programs to celebrate the 1496th birth anniversary of Prophet Muhammad. Across the globe, including in Nepal, Mawlid al-Nabi, the birthday of the Prophet Muhammad, is celebrated on the twelfth day of the month Rabi’ al-Awwal.

Muhammad was born in Mecca, a city in Arabia, in 570 CE. Muhammad’s childhood was fairly quiet, but he lost his mother to an illness in 576 CE. After the death of his mother, Muhammad was cared for by his uncle, Abu Talib. Abu Talib raised Muhammad to adulthood. The Islamic calendar (Hijari Sambat) was kicked off after 53 years of his birth. Presently, Hijari Sambat 1443 is running.

Today marks the commemoration of the preaching of Muhammad. Rallies and gatherings were scheduled for today. People from the Mulsim community visited Jame Masjid (mosque) and the Kashmiri Jame Masjid to pay homage to their ‘Prophet of the God’. It is said recommended health protocols were followed during the celebrations of the birth anniversary of the Prophet Muhammad.

On the twelfth day of the third month, Rabi’ al-Awwal, many Muslims commemorate the birthday of the Prophet Muhammad.

In many predominantly Muslim countries, Mawlid al-Nabi is a major public holiday. Some Muslims refuse to participate in this observance, feeling it is an innovation which places too much emphasis on the Prophet as human and distracts from the true divine source of revelation.

Other Muslims view this festival as a means to teach their communities about the Prophet Muhammad’s way of life, which all Muslims seek to emulate.

Throughout the world, there are a variety of expressions for the observance of the birth of the Prophet: some celebrations take place simply in private homes; other Muslims decorate their local mosque with lights and hold large festive gatherings.

Celebrations of Mawlid al-Nabi include sharing food, attending lectures about the Prophet’s life and virtues, salawat prayer services, participating in marches, and reciting the Qur’an, litanies, and devotional poetry of the Prophet. In some countries, such as Pakistan, the entire month of Rabi’ al-Awwal is observed as the Prophet’s “birth month.” In Singapore, the observance of Mawlid al-Nabi is a one-day festival which often includes special “birthday parties” for poor children and orphans in addition to the regular prayers and lectures in local mosques. Azhar Square in Cairo is the site of one of the largest celebrations, with over two million Muslims in attendance.

In 1994, the First International Mawlid al-Nabi Conference was held in Chicago, Illinois, organized by the Peoria-based Naqshbandiya Foundation for Islamic Education (NFIE). At the conference, shaykhs and scholars from around the world argued for both the religious precedence and cultural importance of the celebration of the birth of the Prophet. More than 1,200 people from across North America and from overseas attended this spiritual conference, the theme of which was “Love of God and His Prophet.” A second conference, “Spiritual Aspects of Islam,” was held in 1995. Lectures were presented by eminent scholars and Sufi leaders from around the world; devotional poetry in praise of the Prophet Muhammad was delivered in Arabic, Farsi, Urdu, Kurdish, Bosnian, and English.

The various ethnic groups in Nepali Muslim community bring their distinct customs to the festival observance of Mawlid al-Nabi.