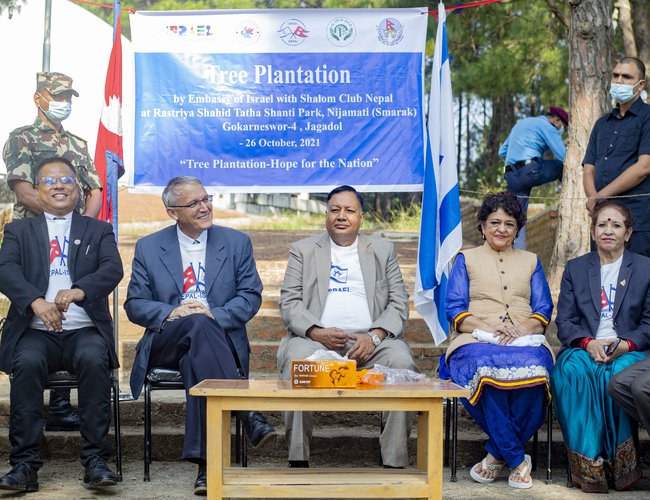 The Embassy of Israel together with Shalom Club Nepal organized the “Tree Plantation Program”, in Rashtriya Shahid Tatha Shanti Park, Nijamati (Smarak), Gokarneswor-4, today, 26 October 2021. In 61 years of Diplomatic Relations between Nepal and Israel, trees were planted in the park, as a symbolic act of celebrating nature, goodness and promoting ecological awareness. 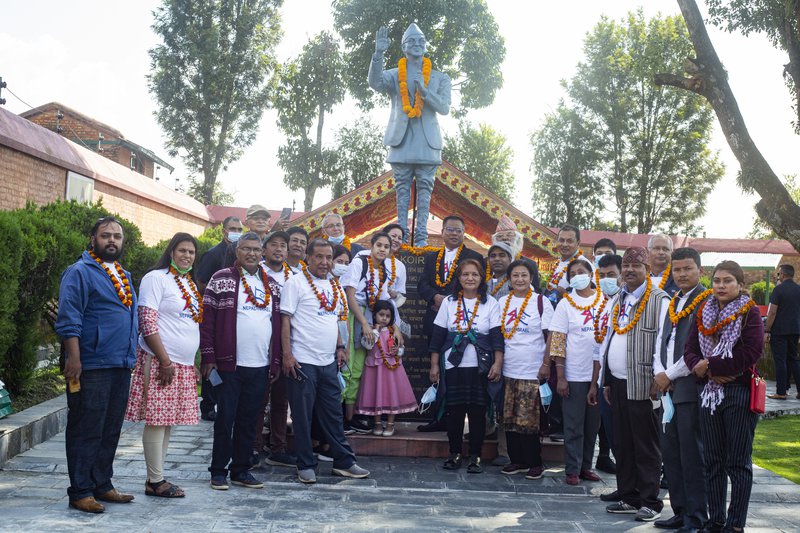 The Honorable Minister for Education, Science and Technology Devendra Paudel, graced the Tree Plantation Ceremony as the Chief Guest. Expressing the importance and willingness to develop the park, the Minister said, “This is my third visit to this Park. The park would be exemplary for Nepalese as well as foreigners who come to visit the park and wish to know about Martyrs.” He further emphasized that the budget that has been allocated for the park development will be implemented soon.

Addressing the ceremony, Mayor of Gokarneswor-4 Municipality Santosh Chalise said, “More than 5000 people come for the morning, evening walks and exercises. It is a historic place and is surrounded by tourist spots. Hence, the park needs to be publicized.” 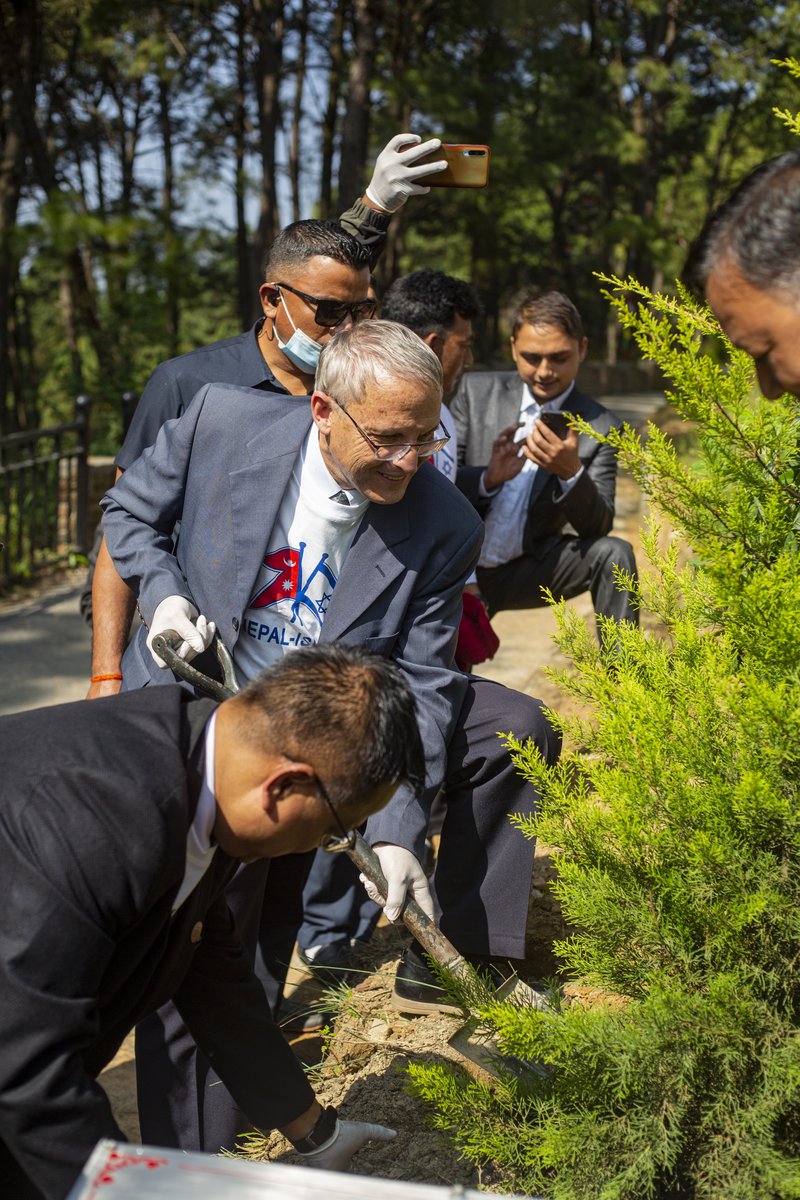 Expressing contentment to be a part of the plantation. Hanan Goder, Ambassador of Israel to Nepal said, “The Embassy of Israel appreciates Shalom Club efforts for preserving the environment and supporting the community.”

Sudarsan Sigdel, Chairperson of the Park thanked the Embassy and Shalom Club for planting at this park that carries historical importance and said that this gesture only strengthens the bilateral relations.

Anil Regmi, Division Forest Officer, Kathmandu pled to grow, nurture the plants and take care of it so that the project is sustainable.

Babu Ram Adhikari, Deputy Secretary of Nepal National Commission for UNESCO showed their interest and willingness to work together for peace and greenery.

The Embassy is hopeful to spread a message that trees are vital; the roots of living and it’s the responsibility of each individual to take care of our natural world for the better today and tomorrow.

The Plantation Program was followed by the visit to B.P. Koirala Musuem‘Sundarijal Bandigriha.’ The relations between Nepal and Israel were established at the initiation of the two great leaders and Prime Ministers of their respective countries, B.P. Koirala and David Ben Gurion on 1 June 1960. Marking this important event, Ambassador Hanan Goder along with the Embassy staff and Shalom Club Members visited B.P. Koirala Museum. Nepali Congress CWC member Sujata Koirala, represented the Koirala family to pay tribute to BP Koirala. A tree was also planted at the premises of BP Museum as a symbol to mark the event. 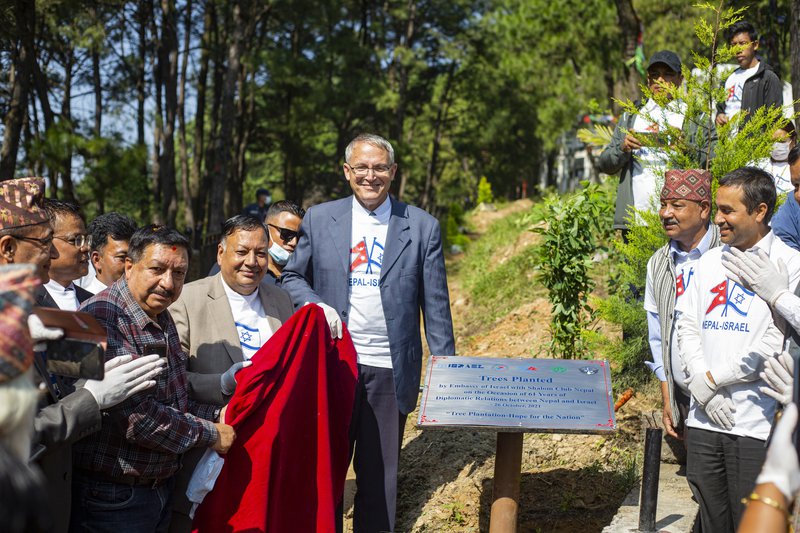 Parsuram Pokhrel, Director at the Museum briefed about the museum and talked about the strong relations between Nepal, Israel and Koirala Family. Ambassador Goder expressed his appreciation to B.P. Koirala as a great leader and as a good friend of Israel. Israel will never forget that Nepal was the first and the only country from this part of the world that kept relations with Israel at the time. 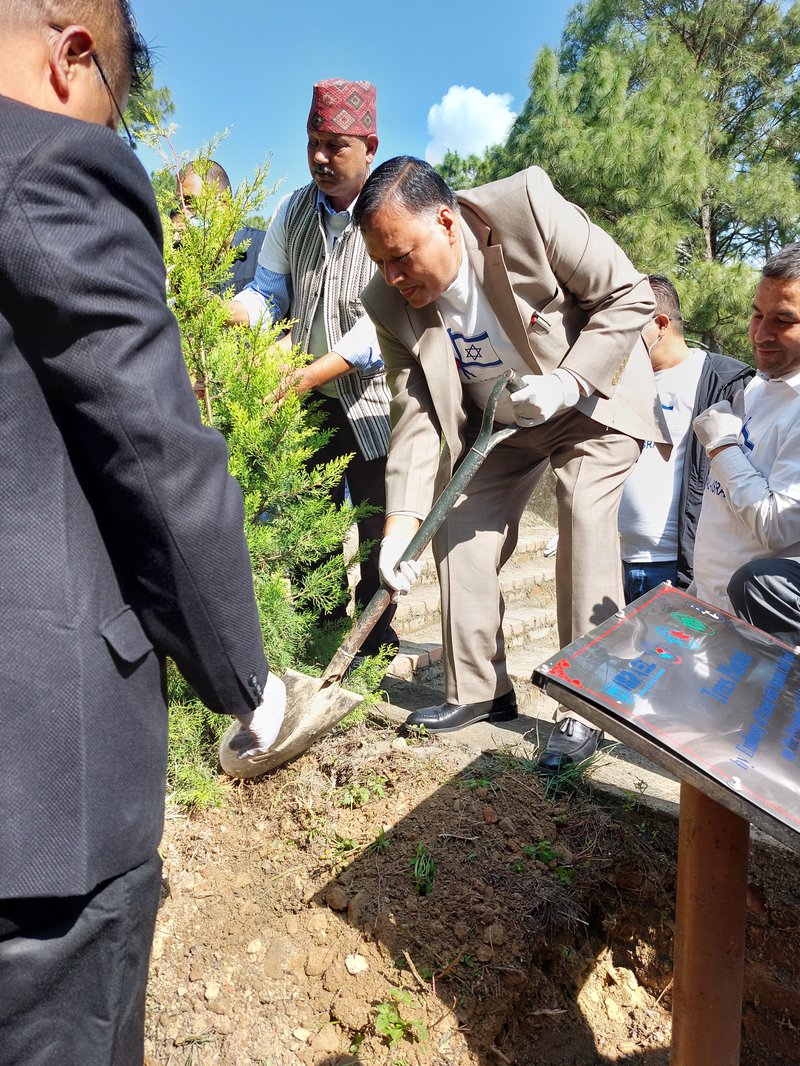 New Data On Nepal PLHIV Stigma Index 2.0 Indicates The Need To Create Arespectful And Equal Environment For PLHIVs In Community And Workplace By NEW SPOTLIGHT ONLINE 18 hours, 44 minutes ago

Melamchi’s Water To Be Distributed By December 13 By Agencies 2 days, 12 hours ago