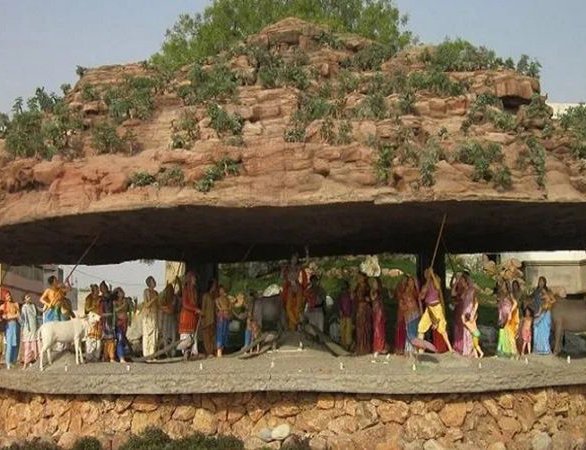 Govardhan Puja is on November 15 this year, observed on the fourth day of Diwali. The term means ‘pile of grain,’ and is celebrated in Hindu households to cherish Lord Krishna’s victory against Lord Indra by elevating the Govardhan hill. The heap of grain symbolizes this hill and also aligns with the teachings of Lord Krishna on worshipping nature. The day is also known as Annakut Pooja, and is one of the most important spiritual rituals performed across Nepal and India.

Nepali Hindus are observing Gai Puja or cow worship, Goru Puja or ox worship and Mha Puja or worship of the self across the country today on the fourth day of the five-day-long Tihar festival. Tomorrow is November 15 and Sunday the fourth day of Tihar.

Govardhan Puja rituals are observed today with the replicas of the Gai and Govardhan Mountain made out of the cow dung.

The rituals are linked to the Hindu God Sri Krishna who, according to the legend, lifted the Govardhan Mountain by his hand and protected the people of a place called Gokul from torrential rains caused by Indra, the God of rain.

It is believed that the rain God was angered and thereby caused the heavy downpour.

Similarly, ox is worshipped today as it is a very useful animal in different agricultural works in Nepal which is a predominantly agricultural country.

Devotees of Lord Krishna perform the Govardhan puja or Annakut on the Pratipada Tithi, Shukla Paksha (waxing phase of the Moon) in the Hindu month of Kartik. This day stands fourth in the five-day-long Diwali festival that commences with Govatsa Dwadashi puja or Dhanteras (in some regions) followed by Naraka Chaturdashi and Lakshmi Pujan. This festival is associated with the legend of Lord Krishna's triumph over Indra, the King of the Devas. Read on to know the Govardhan Puja 2020 date, puja time and other details.

Govardhan puja is performed by devotees of Lord Krishna. It is believed that Lord Krishna defeated God Indra, the King of the Devas on this day

Govardhan Puja usually falls on the day after Diwali and is also known as Annakut Puja. Govardhan Puja 2020 will be celebrated on 15 November (Sunday).

Legend has it that the people of Braj region would make vast offerings to Lord Indra to seek his blessings. Once Lord Krishna, when he was still a little boy, wondered why one should resort to appeasement, believing that Bhakti or devotion is the only way to connect with divinity. Realizing his point, Nanda and the brijwasis decided to end the tradition of appeasing Lord Indra.

Angered at their decision, Indra lashed the region with torrential rains and thunderstorms. To end the people's sufferings, Krishna lifted the Govardhan Parvat with his Kanishtha or little finger and provided shelter to people and their cattle and livestock.

Having continued with his destruction for seven days and nights, on the eighth day, Lord Indra conceded defeat.

On the day of Govardhan Puja, people cook and offer around 56 dishes, called chhappan bhog, to Lord Krishna as a mark of gratitude.

In Maharashtra, Govardhan Puja is celebrated as Bali Pratipada or Bali Padva. It is believed that Vamana, an incarnation of Lord Vishnu won against Asura King Bali and pushed Bali to paatal lok (the underworld). It is said that due to a boon given by Lord Vamana, Bali visits Prithvi Lok from palatal Lok on this day.

As per one of the legends mentioned in Bhagavata Purana, the people of the Braj region would make vast offerings and sacrifices to appease Lord Indra to seek his blessings. Once, Lord Krishna, who was then a little boy, wondered why one should resort to appeasement. He strongly believed that appeasement should be discouraged and Bhakti (devotion) must be the only way to connect with God. After realizing that Krishna raised a pertinent point, Nanda and the Brijwasis ended the tradition of offerings to Indra Dev. Instead, they chose to do their Karma.

Their decision to terminate the tradition enraged Indra. And to avenge the insult, he lashed the region with torrential rains and thunderstorms. Indra's wrath resulted in the loss of property and livestock. People got displaced and suffered massive losses. And to end their sufferings, Krishna lifted the gigantic Govardhan mountain on his little finger (Kanishtha) and provided shelter to people, the cattle, and livestock.

Indra continued with his destructive plan for seven days and seven nights, and on the eighth day, conceded defeat. Thus, he bowed before the little boy, who was the incarnation of none other than Lord Vishnu.

The word Govardhan is taken from the mountain named the same, which was single-handedly elevated by Shri Krishna. ‘Go’ is Hindi for cow and ‘vardhan’ means sustenance. ‘Go’ also means senses and the term ‘vardhan’ also means ‘increase,’ resulting in ‘increasing one’s senses’ by worshipping Krishna. It is believed that those who worship Govardhan hill, increase their belief and devotion towards Shri Krishna.

In Hindu history, this day marks Lord Krishna’s victory against Lord Indra. The significance of the basic elements of human life are also underlined on Govardhan Puja. This day is said to be the ideal time to express love towards mother nature. Devotees carry out Annakut Puja – offering Chappan Bhoga featuring 56 food items to their Lord Krishna.

Hindu mythology also tells the story of how people prayed to Lord Indra to protect and save their harvest. Instead, heavy rainfall resulted in the destruction of these fields. The importance of nature and its effects was preached by Lord Krishna and fought against Lord Indra’s tyranny as he caused stormy rainfall. By lifting the Govardhan hill, Lord Krishna sheltered the people and shielded them from Lord Indra’s wrath.

Another legend linked to Govardhan Puja is of King Bali who Lord Vishnu defeated. King Bali is believed to come out every year from Pataal Lok on the occasion of Govardhan Puja to visit his Kingdom. For this reason, this day is also widely known as ‘Bali Pratipada’ and ‘Padva’ in some parts of India.