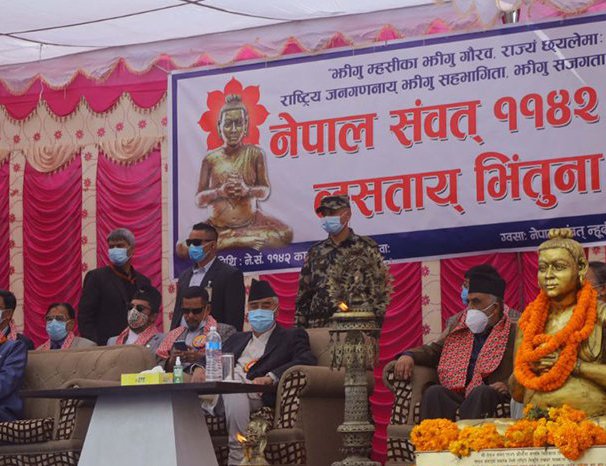 Prime Minister Sher Bahadur Deuba has said the campaign to alleviate poverty had begun with the beginning of the era of Nepal Sambat.

In his address to a program organised by the Shankhadhar Sakhwa Academy on the occasion of Nepal Sambat 1142 at Madhyapur Thimi Chowk today, the Prime Minister dubbed the Nepal Sambat as an originality of Nepal and underlined the need of bringing this into practice.

As the Prime Minister said, Shankhadhar Sakhwa was given the title of national luminary in recognition of his contribution to the establishment peace in the society and the enhancement of independence and sovereignty of Nepali people.

It was Sankhadhar Sakhwa who had liberated the people from debt and slavery. He thus provided them the situation to live with dignity and independence, the PM said. Religious and cultural diversities in Nepal have contributed to consolidating national ties, inspiring the Nepali people to get further united, according to the Prime Minister who launched the Nepal Sambat App and the calendar of Nepal Sambat on the occasion.

He also garlanded the statue of Sakhwa.