Amid COVID-19 pandemic, the younger generation also more likely to trust scientists and embrace international cooperation, according to a UNICEF-Gallup international survey of more than 21,000 children and adults released for World Children’s Day 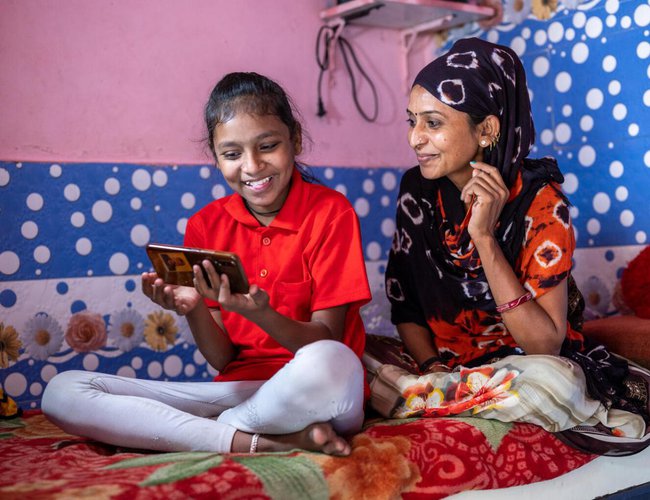 NEW YORK, 18 November 2021 – Children and young people are nearly 50 per cent more likely than older people to believe that the world is becoming a better place with each generation, according to a new international survey by UNICEF and Gallup released ahead of World Children’s Day.

The survey shows that young people are also more likely to believe childhood itself has improved, with overwhelming majorities believing that healthcare, education, and physical safety are better for today's children than for their parents' generation. Yet, despite their optimism, young people are far from naïve, expressing restlessness for action on climate change, skepticism about information they consume on social media, and struggling with feelings of depression and anxiety. They are far more likely than older people to see themselves as global citizens, and more likely to embrace international cooperation to tackle threats like the COVID-19 pandemic.

“There is no shortage of reasons for pessimism in the world today: Climate change, thepandemic, poverty and inequality, rising distrust, and growing nationalism. But here is a reason for optimism: Children and young people refuse to see the world through the bleak lens of adults,” said UNICEF Executive Director Henrietta Fore. “Compared to older generations, the world’s young people remain hopeful, much more globallyminded, and determined to make the world a better place. Today’s young people have concerns for the future but see themselves as part of the solution.”

The poll,The Changing Childhood Project, is the first of its kind to ask multiple generations for their views on the world and what it is like to be a child today. It surveyed more than 21,000 people across two age cohorts (15-24 years old and 40 years old and up) in 21 countries. Nationally representative surveys were undertaken in countries across all regions – Africa, Asia, Europe, and North and South America –and income levels. While the survey did not include Nepal, there remains a number of important findings that may inform national reflection on intergenerational shared values and differences.

Overall, the data paint a picture of young generations as productsof globalization. For example, young people (39 per cent) are on average almost twice as likely as older people (22 per cent) to identify most with being part of the world, versus their own nation or locale. With each additional year of age, people are on average about one per cent less likely to identify as a global citizen.

The survey – conducted during the pandemic – also finds that children and young people are generally more trusting of national governments, scientists and international news media as sources of accurate information. And yet, the poll shows, young people today are aware of problems the world is facing:

The majority of young people see serious risks for children online, such as seeing violent or sexually explicit content (78 per cent) or being bullied (79 per cent).

More than a third of young people report often feeling nervous or anxious, and nearly one in five say they often feel depressed or have little interest in doing things.

On average, 59 per cent of young people say children today face more pressure to succeed than their parents did growing up.

The poll also finds young people want faster progress in the fight against discrimination, more cooperation among countries, and for decision-makers to listen to them:

On average, nearly three-quarters of young people who are aware of climate change believe governments should take significant action to address it. The share is even higher in low- and lower-middle income countries (83 per cent) where the impact of climate change is expected to be greatest.

In nearly every country surveyed, large majorities of youngpeople report that their countries would be safer from threats like COVID-19 if governments worked in coordination with other countries rather than on their own.

On average, 58 per cent of 15-24-year-olds believe it is very important for political leaders to listen to children.

“We cannot know what is on the minds of young people if we do not ask them. UNICEF's survey reinforces the importance of hearing from the next generation and understanding their perspectives,” said Joe Daly, Senior Partner at Gallup. “The children of today are the leaders of tomorrow; it is crucial for older generations to do their part to ensure our children inherit a better world.”

The survey finds some areas of strong alignment between young and older generations – notably around climate, the importance of education, global collaboration and children’s agency. By contrast, optimism, global mindedness and recognition of historical progress reflect some of the deepest divides.

“While this research paints a nuanced view of the generational divide, a clear picture emerges: Children and young people embody the spirit of the 21st century far more readily than their parents,” said Fore. “As UNICEF prepares to mark its 75th anniversary next month, and ahead of World Children’s Day, it is critical we listen to young people directly about their well-being and how their lives are changing.”

World Children’s Day – celebrated every year on 20th November – aims to raise awareness for the millions of children that are denied their right to adequate health care, nutrition, education and protection, and to elevate young people’s voices as critical to any discussions about their future.

The Changing Childhood Project is the first survey to ask multiple generations of people across the world for their views on what it’s like to be a child today. For the project, UNICEF partnered with Gallup to survey more than 21,000 adults and children in 21 countries between February and June 2021. All samples are probability-based and nationally representative of two distinct populations in each country: people aged 15-24 and people aged 40 and older.

The coverage area is the entire country, including rural areas, and the sampling frame represents the entire civilian, non-institutionalized, population within each age cohort with access to a telephone.