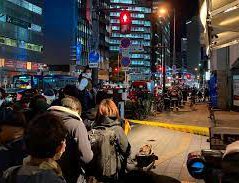 Investigative sources in Japan suspect a 61-year-old man of starting a fire that killed 24 people on Friday in the western city of Osaka. They are treating the incident as a possible case of murder and arson.

The blaze started at about 10:20 a.m. in a clinic that the man had been visiting on the fourth floor of an eight-story building.

Twenty-eight people were taken to hospital. Fourteen men and 10 women believed to be in their 20s to 60s were later pronounced dead.

The victims were all reportedly at the clinic, which specializes in psychosomatic medicine and psychiatry.

Police say witnesses saw the man place a paper bag containing liquid near a heater in the waiting room. The witnesses say he then kicked it, and the liquid caught fire.

Sources say the man is in critical condition and being treated in hospital.

About 30 minutes earlier, a small fire broke out at the man's home 3 kilometers away. Police suspect it was also the result of arson.