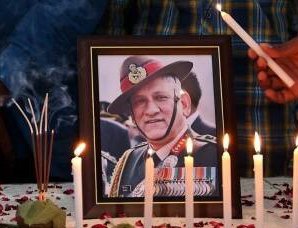 From his words and actions, Chief of Defense Staff of Indian Army late Bipin Rawat proved as a true friend of Nepal. His death in the helicopter crash was a great loss for Nepal as well.

Visiting Nepal twice in his tenure as the chief of Indian Army, General Late Rawat touched the hearts and minds of Nepalese army promising to provide all necessities of the army. However, the wishes of a fluent Nepali speaker General to visit Muktinath were unfulfilled. Due to bad weather, the visit to Muktinath was cancelled in 2018.

Describing General Bipin Rawat as a "true friend of the Nepal Army," the Chief of the Army Staff in the Nepal Army, General Prabhu Ram Sharma said he was shocked by the tragic accident, and called up General Rawat's family over phone to offer condolences, a statement issued by the Nepal Army said.

The Nepal Army expressed grief over the demise of Indian Chief of Defence Staff General Bipin Rawat, who was killed a day earlier in a chopper crash along with 12 others in the state of Tamil Nadu.

In a statement, the Nepal Army expressed its condolences over the death of Rawat, who was also Nepal's Honorary Chief of the Army Staff, his wife Madulika and 11 other military personnel.

General Rawat enjoyed close and cordial ties with Nepal. On March 29, 2017, he was conferred with the title of honorary general of the Nepal Army by President Bidhya Devi Bhandari.

General Sharma also offered his condolences to the Indian Army and General Rawat's family by phone and a letter, said the statement.

Prime Minister Sher Bahadur Deuba has expressed anguish over the tragic demise of General Bipin Rawat, the first Chief of the Defence Staff, who died in a helicopter crash, and extended his heartfelt condolences to the Indian government and the bereaved families.

"Deeply saddened by the tragic demise of Gen. Bipin Rawat, his wife and several defence officials in a helicopter crash. My heartfelt condolences to the bereaved families and the Indian Armed Forces," Deuba said in a tweet.

General Rawat, who was conferred with the honorary title of Nepal Army in 2017, had visited Kathmandu as Chief Guest for Nepal Army Day.

Gen. Rawat took charge as India's first Chief of Defence Staff on December 31, 2019, after serving as the Army Chief for a full three-year term.

The Mi-17V5 helicopter of the Indian Air Force (IAF) carrying the 63-year-old tri-services chief crashed near Coonoor in Tamil Nadu, killing 13 of the 14 people on board, including his wife and 11 other armed forces personnel.

Rawat started his career as an officer in the Gorkhas and rose to command 5/11 Gorkha Rifles, the battalion his father Lt Gen L S Rawat also commanded.

Bipin Rawat was nearly two years into his term as India’s first Chief of Defence Staff and presiding over the most significant transformation of the defence architecture of the country.

General Rawat will be remembered in Nepal as a true friend.

Niranjan Koirala Is No More By A Correspondent 1 year, 5 months ago

In Memory Of Dr. Sukhdev Shah By Ambika P. Adhikari 1 year, 8 months ago

Yagya Prasad Acharya Is No More By NEW SPOTLIGHT ONLINE 1 year, 9 months ago